Ginger Baker, the volatile but legendary drummer for Cream, died Sunday.  The lyrics above are from their recording Tales of Brave Ulysses, which was based on a poem by Martin Sharp.  The song has always been a personal favorite of mine.


Winter in Utah rarely classifies as leaden, but we are going to to get a taste of it nonetheless later this week.  And, if you want the full-course dinner, just head to the mountains to our north.

A deep, cold, upper-level trough and associated cold front is forecast to drop into the western United States this week.  The GFS 700-mb forecast for 1200 UTC 9 October (0600 MDT Wednsday) shows the cold front approaching Salt Lake City.  To our north, southwest Montana, portions of Idaho, and northwest Wyoming are getting a pounding with the low center over the Yellowstone region. 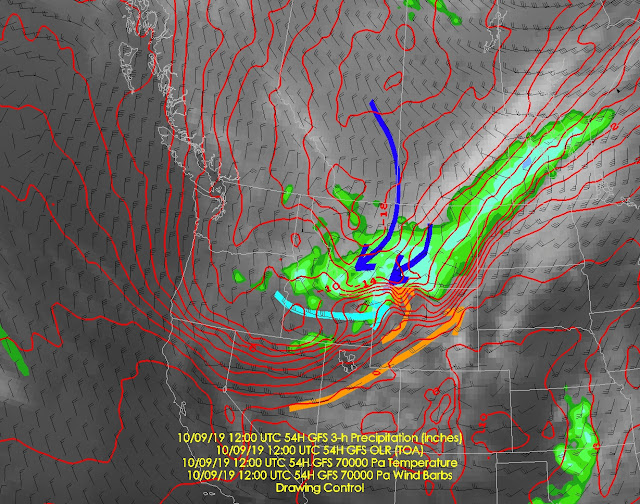 By 0000 UTC 10 October (1800 MDT Wednesday), the cold front has pushed through northern Utah and the coldest air of the season is pushing in.  Meanwhile, snow continues in portions of Wyoming and Montana. 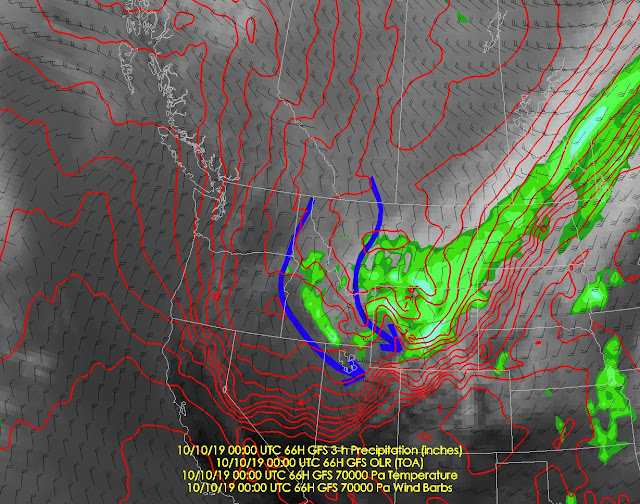 Mike Wessler and I have been experimenting with the production of downscaled snowfall products for the western United States.  Below are estimates from the GFS for the 24-hour period ending at 0000 UTC 10 October (1800 MDT Wednesday) showing accumulations of 2 inches or greater across much of southwest Wyoming, even the valleys.  The northern Absaroka Range and other high terrain of southwest Montana see more than 16 inches.

We'll see how that experimental product verifies, but it does look like a big event for southwest Montana and environs, as illustrated by the weather story graphic below, which was issued at 0340 MDT this morning (Monday) from the NWS forecast office in Billings. 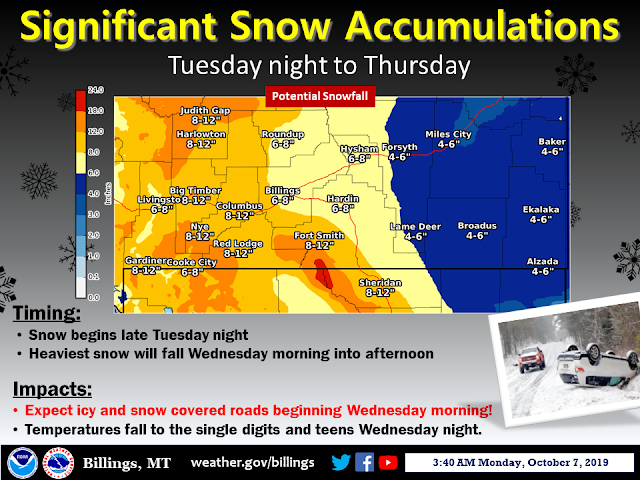 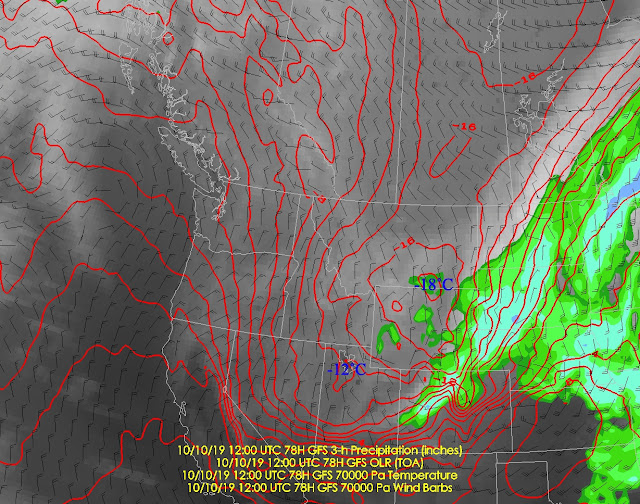 For northern Utah in early October, that is the crème-de-la-crème of cold air, as a friend of mine would say.  In fact, the earliest that we have ever seen 700-mb temperatures that low is on the 13th of October.  The graph below shows the climatology of 700-mb temperatures based on soundings from northern Utah.  The thin blue line shows the lowest recorded at each sounding time (1200 UTC or 0000 UTC.  In October, prior to the 13th, there has never been an observation below -10.3˚C (although there was an observation of -10.8˚C on the 18th of September). 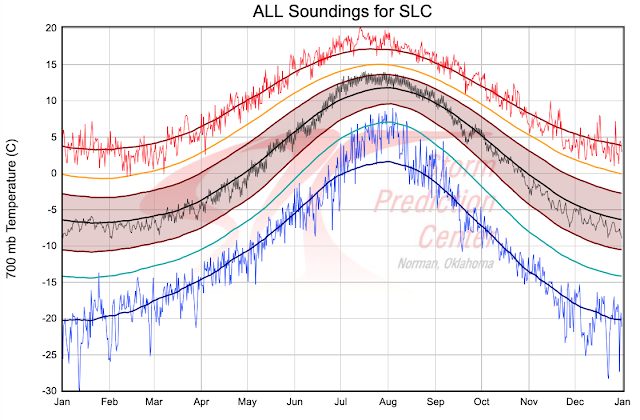 The bottom line is that this is an unusually strong early season cold surge.  Right now, although it looks like we may see some mountain snow, a big dump will require the lake to get going or the trough to dig further south than presently forecast.  The downscaled SREF plumes for Alta-Collins show most members producing light accumulations and all producing less than 6 inches.  That being said, those forecast do not fully account for the influence of the lake, which I'm not going to speculate about at these long lead times.

The bottom line is that today and tomorrow are looking stellar in northern Utah, but the wheels fall off Wednesday.  Keep an eye on forecasts this week in case the trough shifts southward or the lake comes into play.
By Jim S Posted at 10/07/2019 09:51:00 AM