Building on yesterday's post (#WinterIsComing), I think it's safe to say that the atmosphere will be in outlier mode this week as a deep and exceptionally cold upper-level trough moves across Utah and the surrounding states.

The models are still calling for 700-mb (10,000 ft above sea level) temperatures of between -12˚C (GFS) and -14˚C (NAM) at 1200 UTC (0600 MDT) Thursday, which would be the lowest measured by weather balloon over Salt Lake City so early in the season.  The latest (downloaded 0827 MDT Tuesday 8 October) NWS forecast has a hard-freeze warning in place for Wednesday night through Thursday night, with a low Wednesday night of 29, high Thursday of 39, and low Thursday night of 27.

Let's put those numbers into perspective.  Observations have been collected at the Salt Lake International Airport since 1928.  There have only been two years in which there was a minimum temperature of 27˚F or lower on any day from October 1–12, 1946 (27˚F) and 1955 (26˚F).

In fact, the earliest we have had a maximum temperature at the airport less than 40˚F is October 24th.

Time will tell if we end up setting records, but the bottom line is that although we will enjoy a splendid day today, Wednesday and Thursday will bring an exceptional cold surge into northern Utah.

Snow?  Well, the setup isn't great for a big storm unless the lake were to really go big.  As can be seen in the NAM time-height section below, we see a shallow layer with high relative humidity come through with the front on Wednesday and then a period of relatively moist, but shallow, northwesterly flow through roughly 0600 UTC (0000 MDT) Thursday.  After that, the flow goes north-northwesterly and we're a bit moisture starved.

Plumes from the SREF show that most members produce 4 inches or less of snow at Alta-Collins.  The most bullish member (out of 42) puts out nearly 10 inches.

Just to show that talk of flakes in Salt Lake City isn't just hype, plumes for the airport show about 30% of the 42 members generating an inch or more of snow, with three members over 2 inches and one at just over 4 inches.  Additional members produce lighter accumulations.

The SREF doesn't include the influence of the Great Salt Lake all that well, so let's talk about that.  The mean Great Salt Lake temperature is about 14.8˚C right now, compared to a climatology of 16.2˚C.   So, the lake is not unusually warm, but the airmass is unusually cold.  Wednesday afternoon and night in the wake of the front, that instability increases.  On the other hand, the humidity decreases.  Additionally, the wind shifts from NW to NNW.  Based on past events, the NAM is fairly bullish on the lake getting going Wednesday afternoon or evening, although the odds of lake-effect decline Wednesday night and Thursday morning as cooler air moves in.  The GFS is less bullish, mainly because it is drier.  Note that the models disagree some on flow direction, which yields differing affected areas. 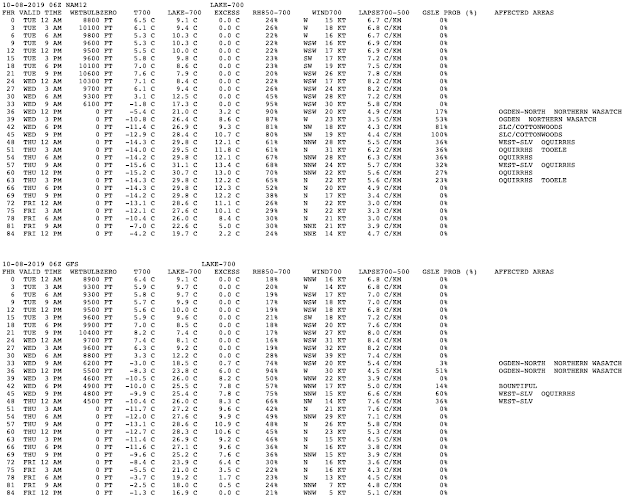 The differences in just these two models indicate the challenges of forecasting lake effect.  It's not as simple as cold air moving over the lake.  Much depends on the humidity, flow direction, and other factors.  Plus, lake effect is often highly localized, so pinpointing its position 36-60 hours in advance isn't possible.

To summarize, exceptional early season cold is on the way.  Snowfall in the Cottonwoods will likely be 3 inches or less unless the lake gets going or the trough comes in a bit moister than expected.  Flakes are definitely possible in the valley, but accumulations will likely be limited.  Nevertheless, there are low probabilities of perhaps something exciting happening somewhere if the lake can get going.

I conclude by saying that this is an outlier event and a sage meteorologist once told me to beware when the atmosphere is in outlier mode.  Monitor official forecasts.
By Jim S Posted at 10/08/2019 09:11:00 AM