So much to talk about today and so little time.  Hence, I need to do this in rapid-fire mode.

Forecast 700-mb temperatures for Salt Lake City at 0000 UTC 30 October (1800 MDT Today) are -17.7˚C by the NAM and -18.1˚C by the GFS.  These are slightly higher than advertised a few days ago, but will still represent records in the upper-air sounding record for the month of October.

The NWS forecast of 13˚F for tomorrow (Wednesday) morning would be the lowest temperature ever recorded at the Salt Lake City International Airport in October.  I haven't bothered to see what the records are elsewhere, but the current forecast (image grabbed at 7:30 AM MDT Tuesday 29 October) calls for -11˚F in Randolph and, gasp, 24˚F in St. George. 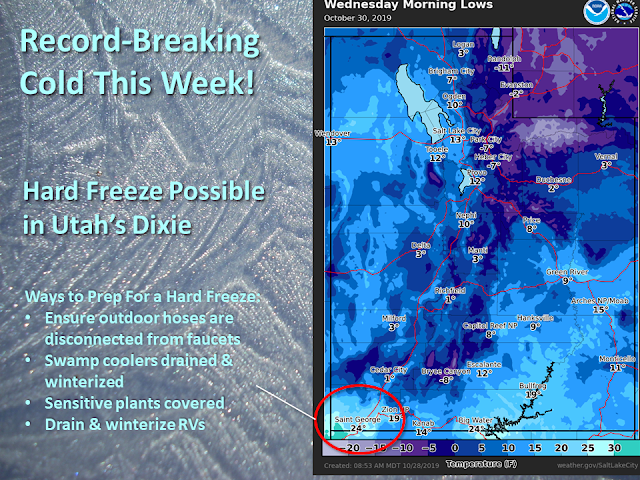 Yeah, it's happening today.  Monitor forecasts.  'Nuff said as I don't have time for a proper forecast.

In weather and war, bad things come from the east.  If you think it is cold now, the HRRR is advertising the passage of a so-called back-door cold front across the Wasatch Front this afternoon.  A back-door cold front is one that comes from the east rather than the west or northwest.  The HRRR forecast valid 2100 UTC (1400 MDT) this afternoon shows the front with a precipitation band just to the west and south of the Great Salt Lake.  This front is not approaching from the west, but rather it passed through the Wasatch Front from the east.

This afternoon has the very real potential to be the most miserable October afternoon ever along portions of the northern Wasatch Front.  In the wake of the back-door cold front are easterly downslope winds. 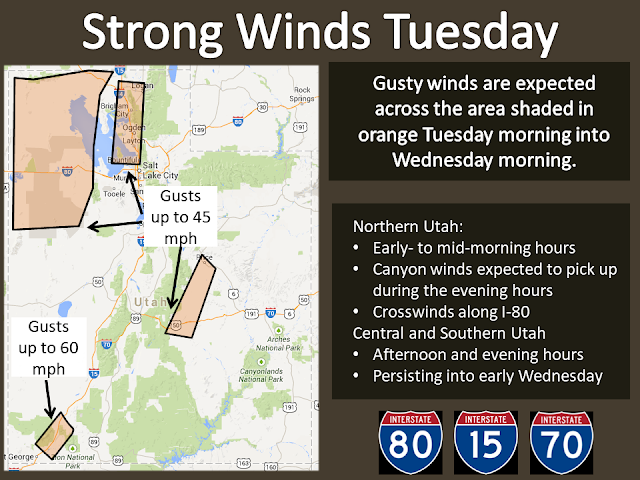 As remarkable as this cold air is, the rebound to warmer air, at least in the mountains, is also amazing. 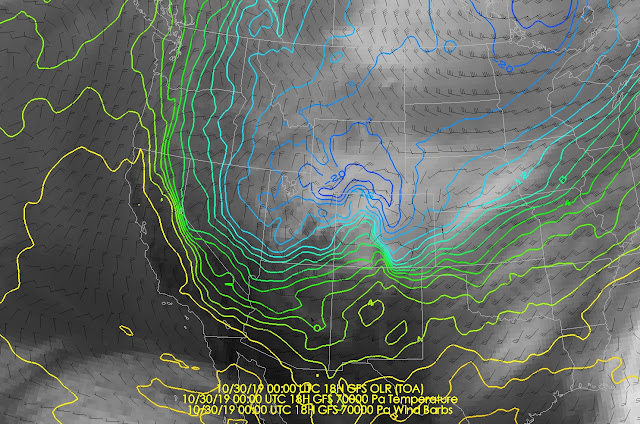 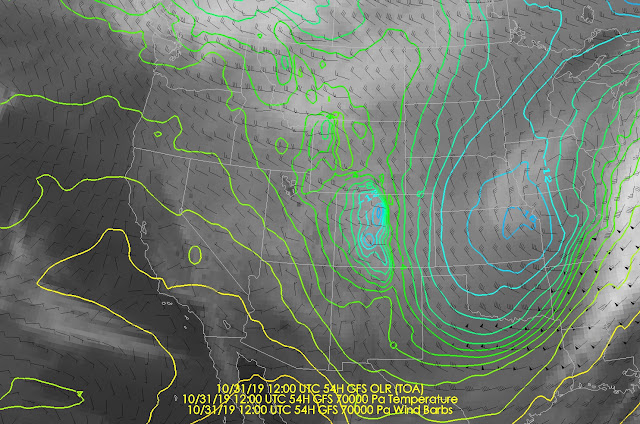 This is a hypothesis worth checking, but the result of that warming aloft will probably be one of the strongest, deepest inversions on record on Halloween.  The word inversion is often used in Utah to mean pollution, but here I'm referring to the temperature inversion that will develop over northern Utah as that warm air moves in aloft.

Forecast soundings from the NAM show a surface-based inversion at 1200 UTC (0600 MDT) Thursday/Halloween morning with surface temperatures near -9˚C, whereas temperatures at 675 mb are around -3˚C.

Inversion season "starts" on November 1, but Mother Nature is going to get started early.  Even by late afternoon on Halloween, only a shallow surface-based mixed layer exists, with constant temperatures from 800 to 700 mb near 0˚C.  Technically, this is not an inversion since temperatures do not increase with height, but that's a meteorological nuance.  It's an extremely stable atmosphere with cold air trapped in the Salt Lake Valley.

Probably not an issue for Halloween (Thursday).  I suspect there will be haze around, but air quality should be "good" or at worst low moderate at worst since we will have just flushed the valley with a pristine arctic airmass.  Another brush by system on Friday should ensure that we don't start the inversion season with a major air pollution event.