It was an exceptionally good snow year in the northern Alps this year, and May was quite cool.  I was wondering if this might lead to a net positive mass balance for Alpine glaciers this year, but at least in Switzerland (and I suspect elsewhere), it wasn't to be.

As reported today by the Swiss Academy of Sciences, glacier melt levels during this summer's heat waves reached record levels and in the net, glacier mass loss for the year exceeded accumulation, yielding a net mass loss of 2% of Switzerland's total glacier volume.  Over the past five years, the rate of mass loss exceeds anything previously observed in records that go back for more than a century.

Perhaps most disheartening is that eastern Switzerland saw exceptional snows during the winter, yet losses were higher than average for the past ten years.  I haven't seen the latest from Austria yet, but it experienced a similar winter and summer compared to eastern Switzerland and I suspect the story will be similar.  Below is a tweet from @robbieshone on October 13 showing scientists taking field observations to determine the annual mass balance of the Hintereisferner, which is Austria's best studied glacier.

I joined a small group of #glaciologists led by Dr. Rainer Prinz from the ACINN @uniinnsbruck, to carry out the annual mass balance of the Hintereisferner. Rainer's team spent 2 days undertaking numerous #scientific jobs across the whole glacier where t... https://t.co/39OuGlJf7s pic.twitter.com/W3Nu4Y2z6y
— Robbie Shone (@robbieshone) October 13, 2019

Below are photos of the Hintereisferner (from https://www.foto-webcam.eu/webcam/hintereisferner1/) in mid June and early August, illustrating the loss of the remarkable snowfall from the 2018/19 winter. 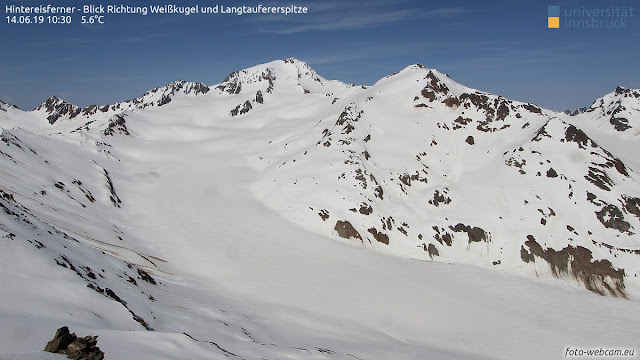 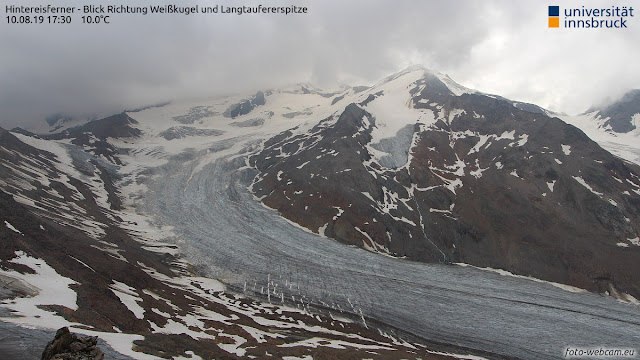