It's a blustery afternoon out there, which is a huge change from earlier this morning.  At the University of Utah, it was 63˚F at 10:26 am MDT, but as of 1:15 pm MDT, it's only 54˚F.  There's been a cold-frontal passage, but one that produced a very unusual time series of pressure, wind, and temperature.

The classic textbook description of a cold-frontal passage features a sharp temperature drop coincident with a pressure trough and wind shift.


Today's frontal passage is an even more complicated beast.  The pressure trough passes just before 0700.  There is a slow shift in the wind, but it is short lived and the wind goes back to SE again over the next 90 min or so.  Then there is a shift in the flow from SE to WNW at around 830, and then a second shift from WNW to NNW at around 1030.  There's no obvious drop in temperature, but rather a slow decline during the period when daytime heating usually yields a temperature rise. 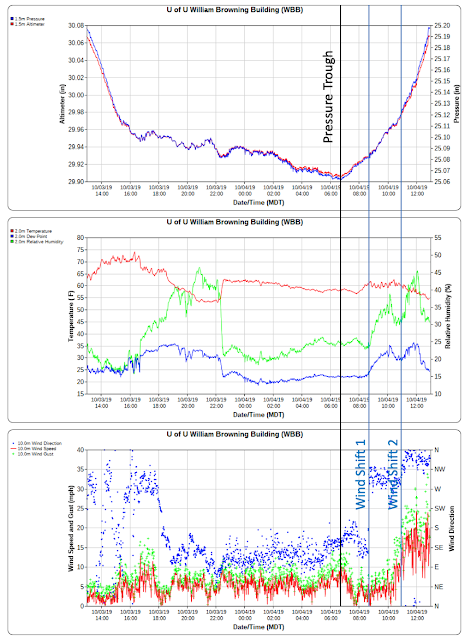 In part, the temperature drop has been masked some by the nighttime cooling, although this doesn't always occur (see for example the first case presented above when the front went through at around 5 AM).  Regardless, the wind shifts show very little correlation with any pressure features, illustrating the non-classical nature of the frontal passage.

Why does this matter?  Well, there are applications where knowing the fine-scale details of a frontal passage is important.  One would be airport operations, which are highly sensitive to wind direction.  Assuming that a front will look "classical" can be a very bad assumption in some instances, contributing to forecast error.
By Jim S Posted at 10/04/2019 01:48:00 PM