Intricacies of This Inversion

As far as dismal grey goes, the past few days take first prize in the Salt Lake Valley due to frequent mid-level clouds, occasional low clouds, plenty of haze, and smog.  I was surprised to hear that we reached PM2.5 levels yesterday that were unhealthy for sensitive groups as the air was still relatively clean on Tuesday and it usually takes four days to build up to that level.  However, the PM2.5 trace from Hawthorne (below) shows it took three, although it was a spike around noon that got us to over 35 ug/m3.
A curious aspect of the current inversion is that it has been relatively elevated.  Yesterday's morning and afternoon soundings from the Salt Lake City Airport show the inversion base is at about 825 mb, which is about 1500 feet above the valley floor.


Often, the inversion is right down near the valley floor, but in this instance, the smog is actually being mixed some.  It's just not able to mix through a deep enough layer to get out of the valley. 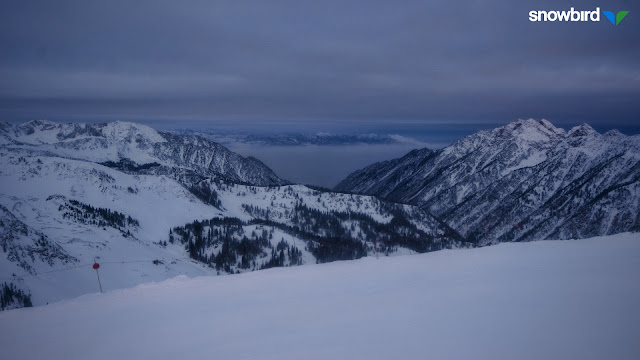 In some respects, that is good news as it means the pollution is diluted a bit by the deeper layer of mixing.  On the other hand, it's still very depressing and the air quality is a best moderate and at worst into the unhealthy for sensitive groups category.

Looking through the weekend, it appears our goose is cooked, at least in the valley.  The models show an upper-level ridge building in with temperatures warming aloft and in the mountains.  The 3-km NAM sounding for Sunday Morning shows a still-elevated inversion with a shallow, moist mixed-layer near the valley floor.
The models are notoriously bad at getting the details of inversions right, but there's really no hope of mixout through the weekend.  Further, given the moisture in place in the valley and the forecast sounding above, I wonder if we will see more widespread fog or stratus (i.e., elevated low clouds) developing through the weekend.

Finally, it is worth pointing out that blaming the pollution on the inversion, as I hear so often, is simply incorrect.  The inversion is simply a meteorological phenomenon that caps a pool of cold air in the valleys and basins of the intermountain west.  The pollution is caused by emissions due to the burning of fossil fuels and wood, as well as from agricultural and other sources.  As I like to say, we have met the enemy, and it is us.
By Jim S Posted at 12/07/2018 07:55:00 AM