Intricacies of This Inversion, Part II

Building on the previous post (Intricacies of This Inversion), it is worth taking a look once again at some of the intricacies of the our current inversion as the evolution is quite interesting from a meteorological perspective.

First some definitions.  An inversion is a layer in the atmosphere in which temperature increases with height.  Within a valley or basin, a cold pool is the layer of cold air beneath that inversion.  Inversions vary in strength, depth, and altitude.  The current inversion has been characterized by an elevated inversion rather than one that is very near the valley floor.  In addition, the cold pool beneath the inversion has featured high relative humidity.  This has led to a cold pool that has not only filled with pollution, but has featured haze (small water droplets that form in a high humidity environment), and clouds.

This morning those clouds largely fill the Salt Lake Valley, and the contrast between valley and mountains couldn't be larger.  I awoke this morning to a depressing scene, as bleak and grey as you will see in Salt Lake City. 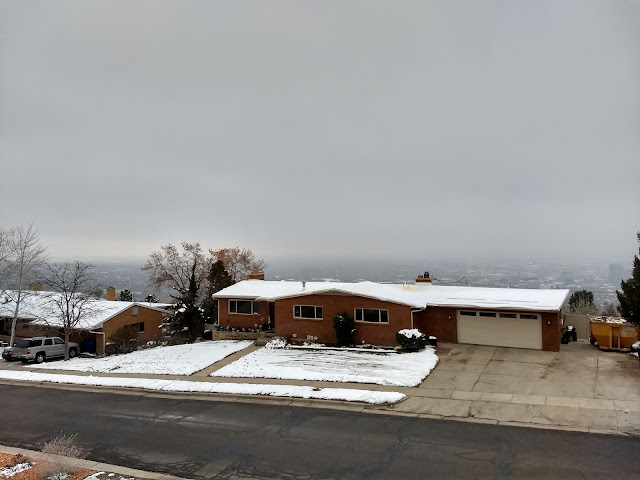 Meanwhile, the weather at Snowbird was stunning, with the view from the top of Hidden Peak showing a sea of stratocumulus over the Salt Lake Valley. 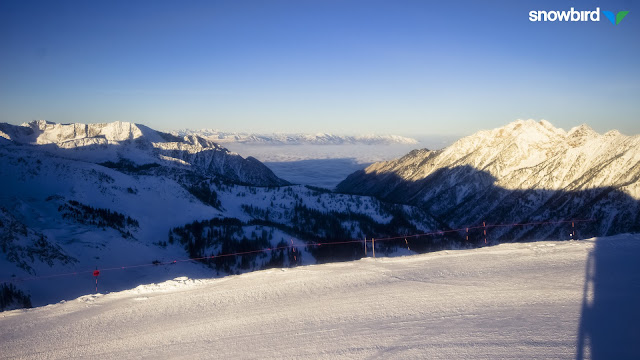 This morning's sounding shows a multi layered structure from the valley floor to crest level.  From the valley floor to about 814 mb (about 6500 feet) the atmosphere was well mixed.  That means pollution is not confined to a very shallow layer near the valley floor, but is actually mixing through a depth of about 2000 feet.  At 814 mb is the base of a weak inversion.  This inversion sits at the top of the stratocumulus layer.  Then there is a second, much stronger inversion, based just below 700 mb (10,000 feet), which is being produced by the upper-level ridge that is building in. 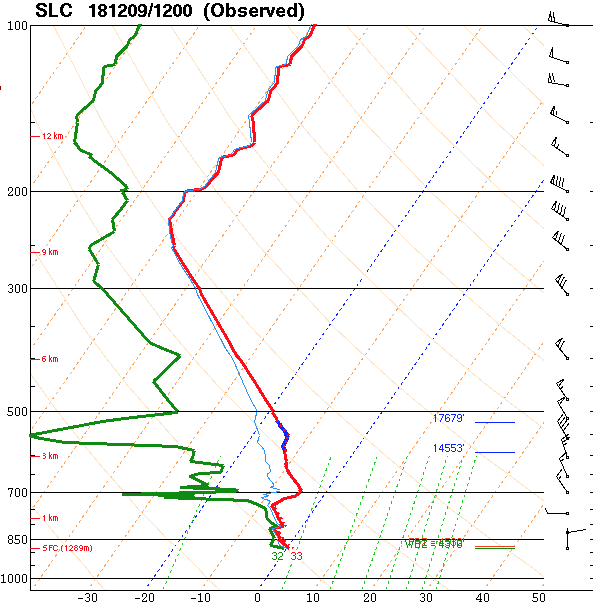 There are some interesting things happening, however, in the Salt Lake Valley on smaller scales.  When looked east this morning, I saw a bright spot along the east bench where the clouds and haze were thinner. 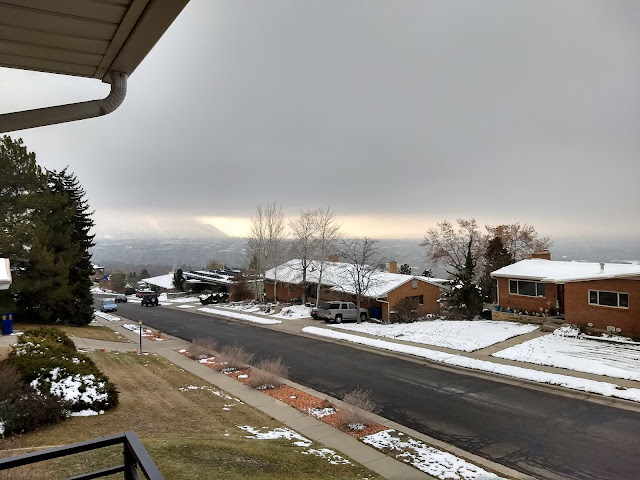 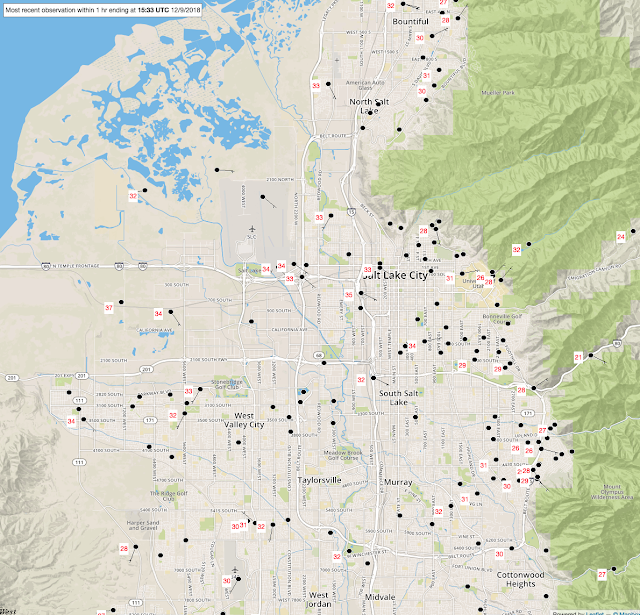 That easterly flow appeared to be disrupting the clouds and possibly contributing to the entrainment of drier and cleaner air into the valley cold pool.  Although the PurpleAir PM2.5 values are sometimes too high when the relative humidity is high, they are very useful for identifying pollution patterns over the valley and show lower PM2.5 indicies along the east bench of the northern Salt Lake Valley, especially north of Big Cottonwood Canyon.  These lower values extend eastward across downtown Salt Lake City.  This is consistent with the extension of easterly and southeasterly flow to the Salt Lake City airport in the station map above. 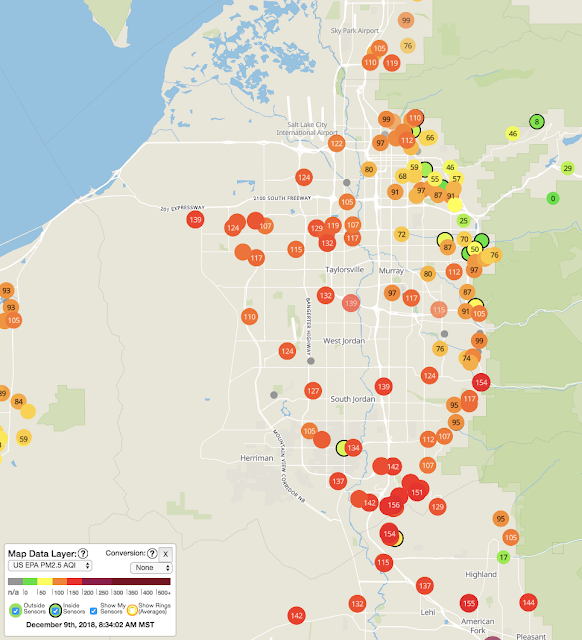 Consistent with this easterly flow and associated entrainment of cleaner air, the air quality at Hawthorne Elementary has dropped significantly, all the way down to about 12 ug/m3.
On the other hand, values remain high in other parts of the Salt Lake Valley to the south and to the west.  One disturbing aspect about this is that the DAQ uses the Hawthorne observations for their web site and is listing the air quality as good (i..e, green) on their web site, despite the fact that it is clearly not good in many parts of the Salt Lake Valley.

The Governor recently announced $100 million for air quality in his 2020 budget.  Whether or not this survives the legislature remains to be scene, but if it does, perhaps some of it can be used to put together a proper air quality monitoring and reporting system for the Salt Lake Valley.  Community (PurpleAir) and University of Utah (www.aqandu.org) networks are now providing valuable information that could be mined to improve air quality information and alerts.  The challenge is how to blend higher cost but higher fidelity instruments with lower cost but lower fidelity instruments.  In any event, we can certainly do better than a county-based air quality sensor based on one site.
By Jim S Posted at 12/09/2018 09:10:00 AM