April 1st is not only a day for fools, but it is also a day that is traditionally used to gauge the peak snowpack.  I'm running a day late, but at least you'll know this blog isn't an April Fool's joke.

Then again, you still might think that the snowpack numbers are a cruel joke.  In the northern Wasatch snowpack water equivalent at all SNOTEL sites is in the lowest 10% of years on record (going back to 1980-1990 depending on site), but not at the lowest.   To the south, Mt. Timponogos is also in the lowest 10%.  The central Wasatch is better, although all sites are still below median.


Let's look at some individual sites.  The Ben Lomond Trail is a personal favorite because it is the only low-elevation SNOTEL in the Wasatch (elevation 5800 feet).  The snowpack there was pathetic for the entire season, with a maximum water equivalent of only 5.5 inches (green line).  It's down to 1.2 inches now, which puts it just ahead of 2015 (blue line) on this date.   Contrast that to last year when this site peaked at over 30 inches (red line). 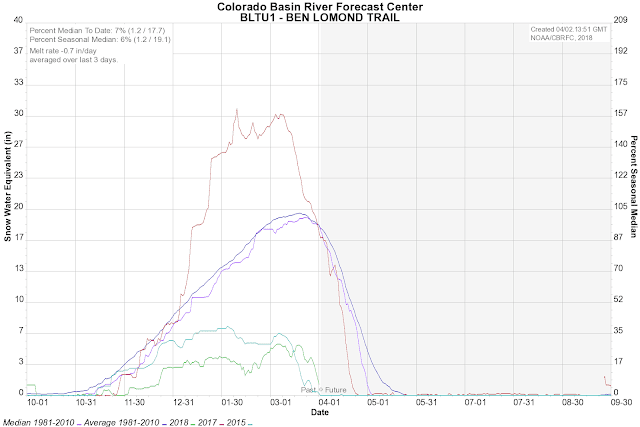 One of the more surprising sites is Parleys Summit.  This site peaked at 12.7 inches of water and still sits at 11.6 inches (green line), not all that far below median (blue line). 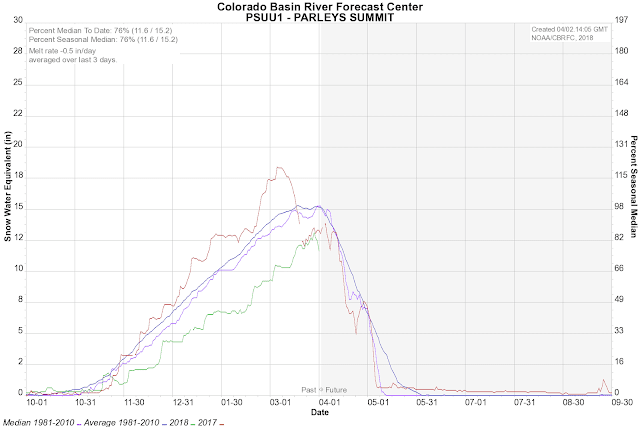 I know what your thinking.  How the hell can that be?  Surely this is an April Fool's joke.  If you drive over Parleys Summit, snow cover is scant, although if you look carefully, you can see it on the north facing aspects.


The Parleys Summit SNOTEL isn't, however, located along the highway, but on a north facing aspect (D thumbnail below) at higher elevation (about 7600 feet) north of the highway. 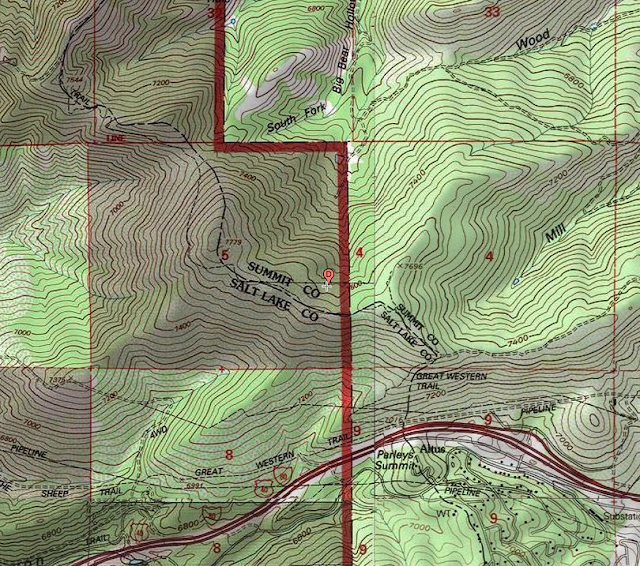 This illustrates an important aspect of interpreting SNOTEL data.  The observations tend to be located in relatively sheltered areas that hold snow well.  They are not necessarily representative of surrounding aspects or areas, especially in a year like this one.

Finally, let's take a look at Snowbird.  Snowbird has been below median the entire season and, with a snowpack water equivalent of 26.3 inches (green line), sits at 71% of median for the date.  It did, however, move ahead of the 2015 and 1992 water years in mid March, so for this date, we're not sitting at the lowest on record. 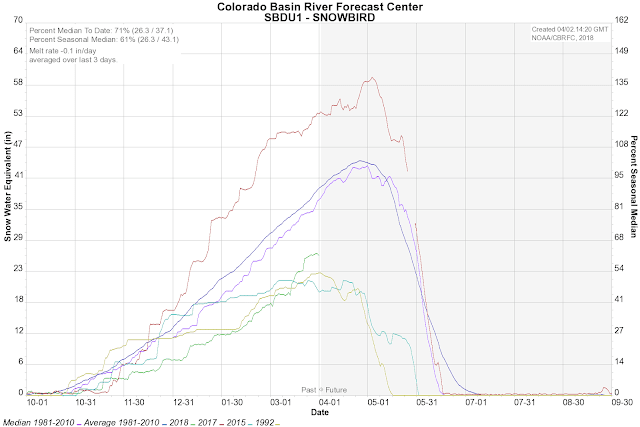 On average, snowpack at this site, which is at 9615 feet, and in other high, altitude, north-facing areas of the central Wasatch, does not peak until late April.  I suspect we are not yet at peak snowpack in those areas.  Don't be a fool.  Keep the skis waxed and the body ready.
By Jim S Posted at 4/02/2018 08:28:00 AM