We are now moving into mid April where any possible powder day is a blessing from the heavens.  We have potential starting tomorrow.

The latest NAM shows a classic Utah spring storm scenario with an upper-level wave digging into the western U.S. and closing off over Colorado.  The latest NAM forecast for 0900 UTC (0200 MDT) tonight whows the upper-level trough extending from the BC coast to California (dashed lines, 500-mb height contours black) with a classic Intermountain cyclone centered over northern Utah and the trough extending southwestward to the high Sierra. 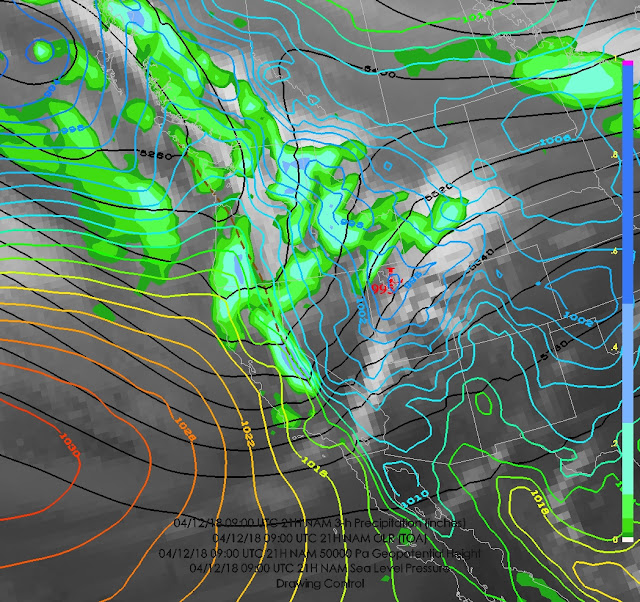 At this time, not much is happening precipitation wise except in far northwest Utah.  Some strong southerly winds are possible, however, during this period, and the NWS has issued a high-wind warning for portions of western Utah.  Info below. 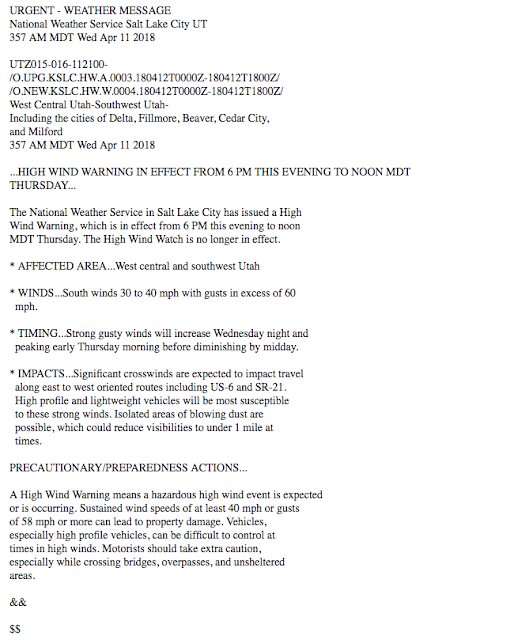 As the upper-level trough pushes inland and the surface cyclone moves northeastward, we get into northwesterly flow and precipitation is expected to develop along the Wasatch Front and Mountains tomorrow morning. 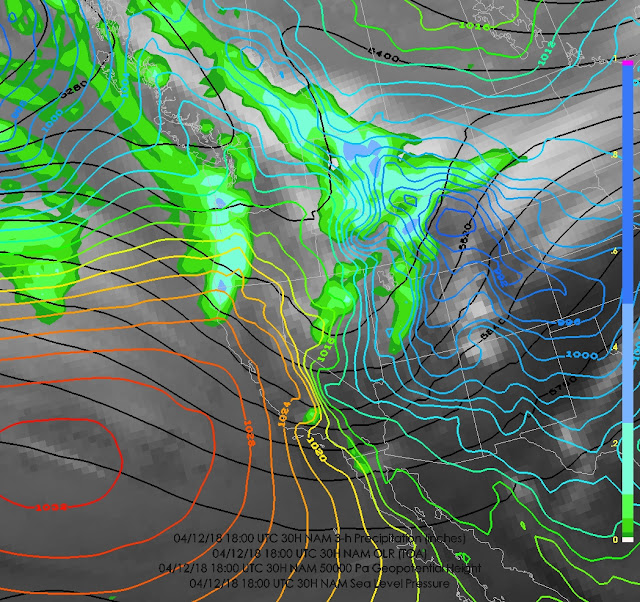 Right now, it appears the lowlands will make it through the morning commute unscathed, but snow-levels will be dropping and the potential for bench and possibly valley snow exists during the day tomorrow.  The forecast below shows 700-mb temperatures (contours), winds (barbs) and 3-h accumulated precipitation for 2100 UTC (1500 MDT). 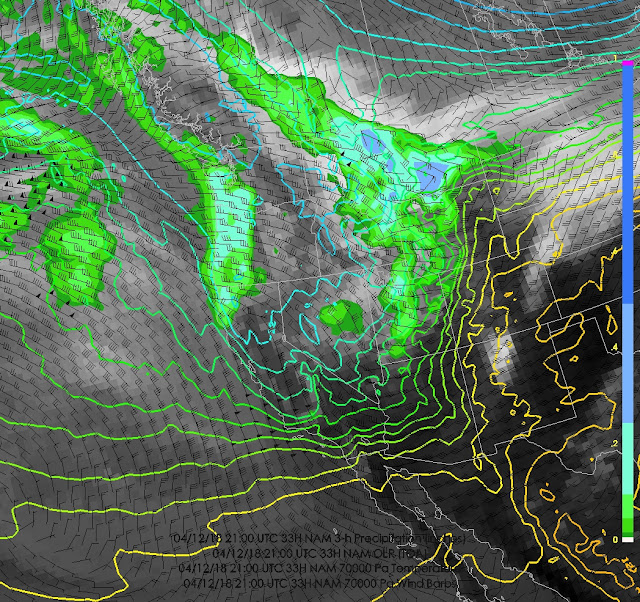 The latest NWS forecast calls for snow down to the valley floors by mid-day Thursday. 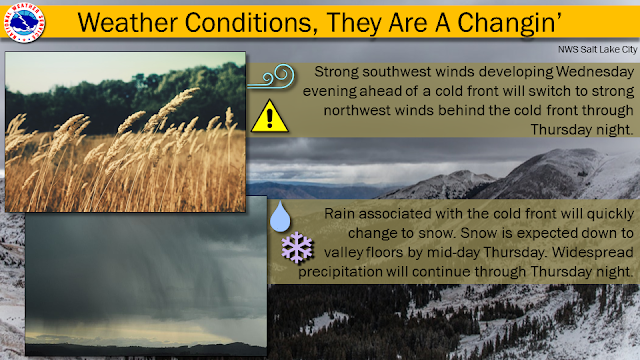 Given that this is a late season storm, the ground is quite warm, and the bulk of the storm for the valleys is expected during the day, accumulations will be largest on cold surfaces on the benches and more limited (or non-existent) over pavement.  Much will depend on elevation and precipitation intensity.  The snippet below fro the 8:47 AM NWS forecast discussion illustrates that this is an evolving forecast situation, with updates expected this afternoon.  Monitor official forecasts. 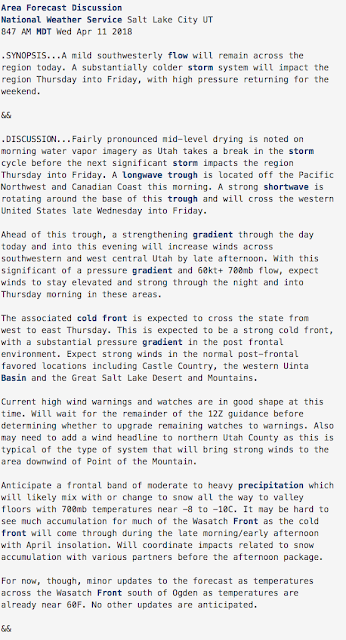 For the mountains, if precipitation were to start early tomorrow morning, there could be a brief period of rain up to 7000 feet, but otherwise this looks like an all-snow storm.  The latest numbers from the NAM add up to 0.88" of water and 15" of snow by 0900 MDT Friday morning.  The later stages of the storm look quite cold, with temperatures at 11,000 feet falling into the single digits. 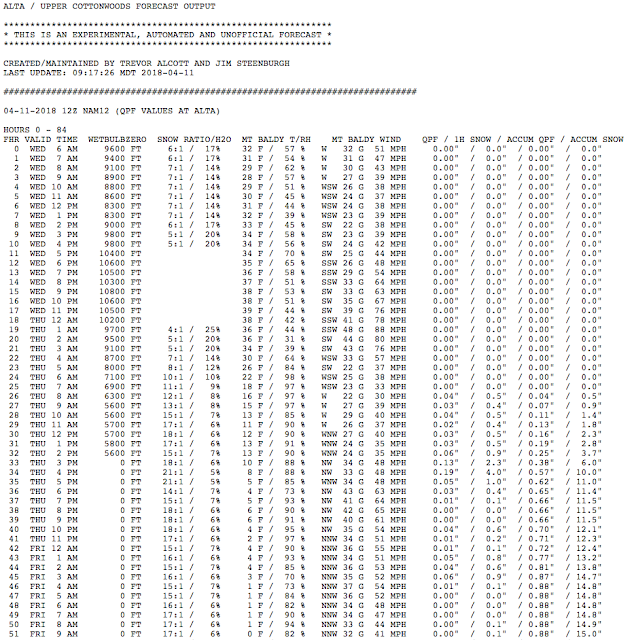 As usual, much will depend on the post-frontal crap shoot.  The time-height section below shows the winds shifting to northwesterly early tomorrow morning and a prolong period with the crest-level (700 mb) flow WNW to NW through about midnight Friday.  There is considerable moisture and mid-level instability during this period.  This is an environment in which significant snows can occur if the flow direction is right and moisture is available.

If this was early February, I would expect that this would be a right-side up storm, but there could be some wildcards.  Tomorrow, with surface heating, we could see some strong convection and that's even possible overnight Friday.  This might produce periods of graupel, especially tomorrow afternoon and evening.

I'm fairly optimistic about this storm and am going on personal powder alert tomorrow.  If snowfall rates are high, or we get a lot of graupel, a dusk patrol might be warranted tomorrow afternoon, with Friday morning having major April powder potential as well.  The former depends on timing and precipitation intensity tomorrow, the latter on how things go Thursday night.  Spring powder is all about synoptic possibilities.  Whether or not you get the goods or ski on a chundery mix depends on processes not resolved by today's models.
By Jim S Posted at 4/11/2018 10:40:00 AM