Wild Weather Ahead for Western U.S.

The models are advertising wild weather ahead as a series of storms develop over the eastern Pacific, affect the Pacific coast later this week, and eventually push inland this weekend.  The 0600 3 April initialized GFS forecast valid 0900 UTC (0300 MDT) Saturday shows a 977 mb low off the Washington coast with a well developed inner core and the attendant occluded and cold fronts moving onto the Pacific Coast.  High integrated water vapor (color contours) exceeding 45 mm, exists ahead of the cold front, consistent with atmospheric river conditions.  What a beauty! 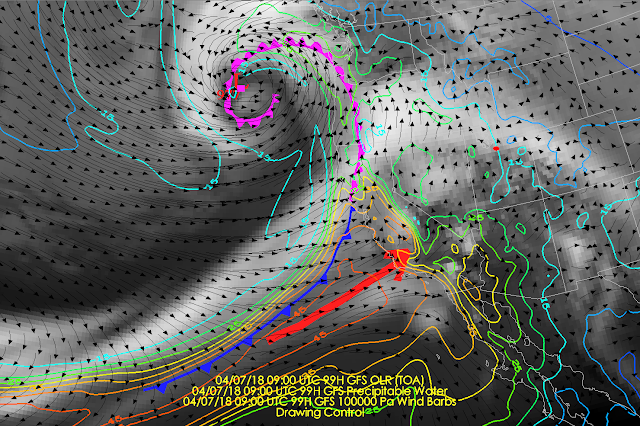 The setup for the wild weather the current pattern over the central North Pacific, which at 1200 UTC this morning features a deep upper-level trough with a strong jet and storm track just north of Hawaii. 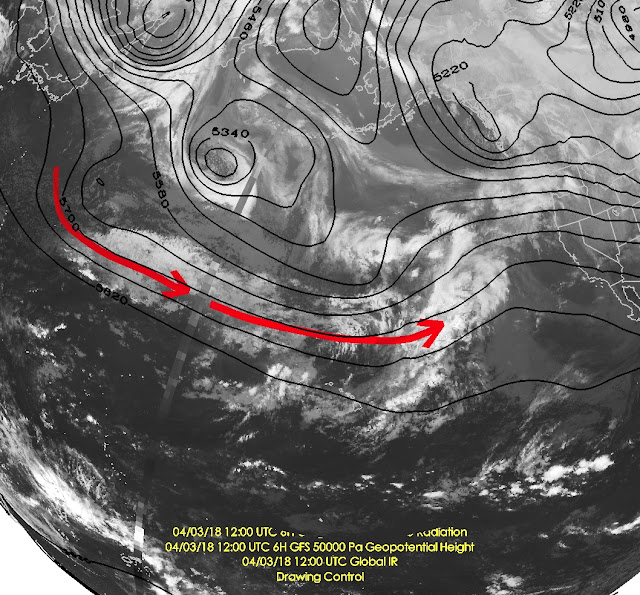 This results in relatively low-latitude storms extracting moisture from the tropics and concentrating it into an atmospheric river that extends from Hawaii to California, as depicted by the integrated water vapor contours from the GFS below.

Integrated vapor transport diagnostics derived from the GFS by the Center for Western Weather and Water Extremes (CW3E) show the export of moisture from the tropics at 0000 UTC 3 April, the transport of moisture to the Pacific cost by 1200 UTC 5 April, the development of an intense atmospheric river with integrated vapor transport exceeding 1600 kg/m/s at 1200 UTC 6 March just upstream of California, and then strong atmospheric river conditions persisting on the California coast at 0600 UTC 7 April. 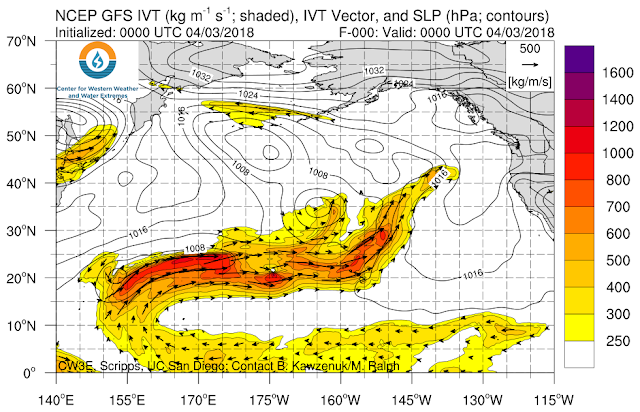 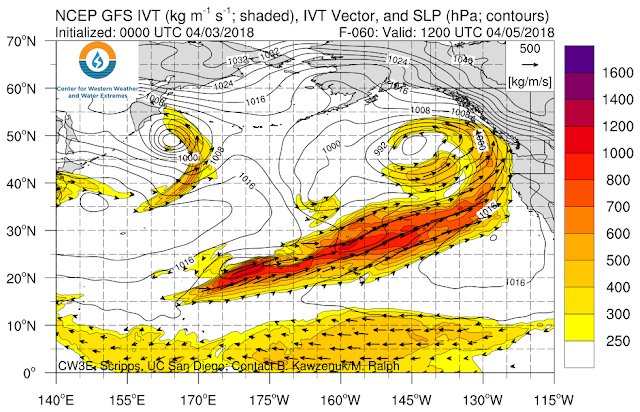 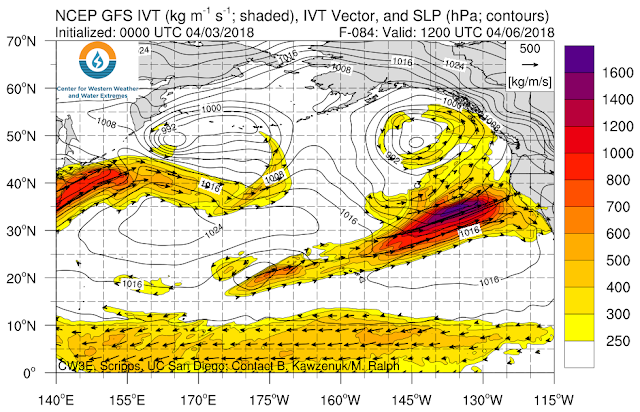 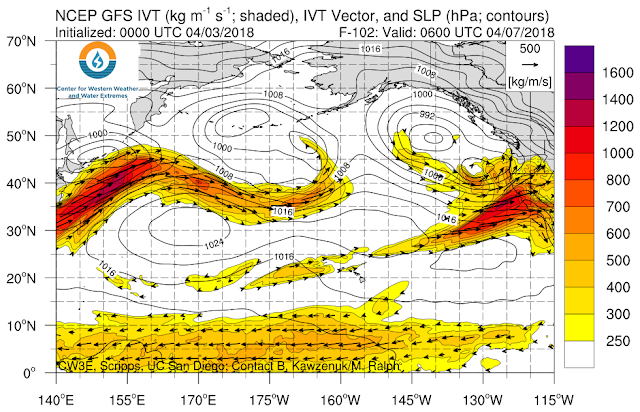 In the images above, you can see the important role played by two cyclones, the first evident near 48N, 145W at 1200 UTC 5 April.  Strong flow along and ahead of the cold front accompanying this cyclone drives moisture transport to the Pacific coast.  Then, a second cyclone, which forms along the trailing cold front and is centered near 43N, 132W at 0600 UTC 7 April further enhances the moisture transport and drives the atmospheric river into California.  It is this second cyclone that is depicted in the image at the top of this post.

Plume diagrams of integrated vapor transport from a location near Monterrey, California (provided by CW3E and Jason Cordeira, Plymouth State University) show the GFS (black line) producing atmospheric river conditions (integrated vapor transport ≥ 250 kg/m/s) from approximately 0000 UTC 6 April through 1200 UTC 7 April.  The GEFS ensemble members generally confirm this timing, but the intensity varies, due to variations in the strength and position of the atmospheric river. 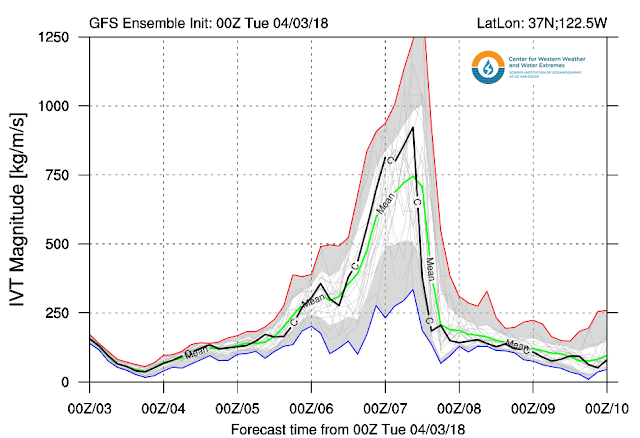 Thumbnail plots valid 0000 UTC 7 April show the variations in strength and position.  Forecast details for California will ultimately depend on the intensity and track of the developing cyclone and cold front, which will ultimately control the position, orientation, and strength of the atmospheric river. 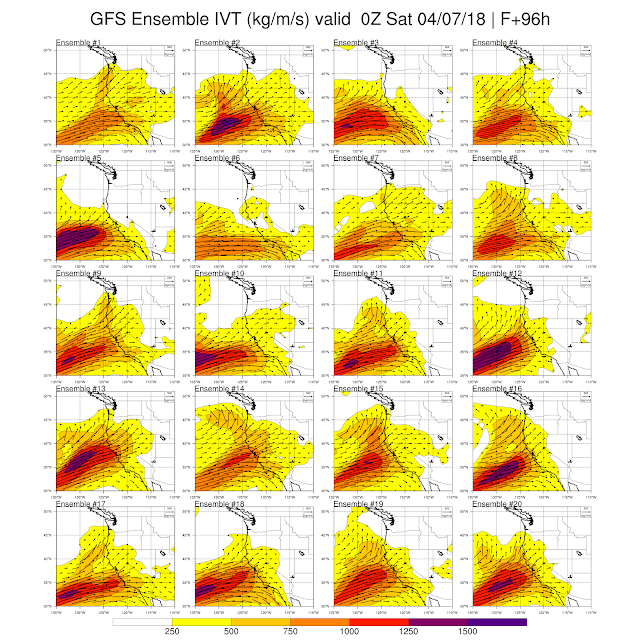 A downscaled NAEFS forecast plume for precipitation and snowfall at the Central Sierra Snow Lab near Donner Pass shows liquid precipitation totals of about 1.25 to as much as 7.5 inches, with a mean of just over 4 inches.  Most of this falls in a 36-hour period.  Snowfall at this elevation (6800 feet) is, however, low for the amount of water due in large part to the warmth of the pre-cold-front environment containing the atmospheric river, which leads to rain in all but the highest elevations of the Sierra.

Utah can expect impacts as well.  We have a chance of showers Friday (valley rain, upper-elevation snow), but the bulk of the system moves in for the weekend.  Right now Saturday looks warm (GFS forecast 700-mb temperatures are 2-3.5˚C Friday night through Saturday afternoon), with a cold-frontal passage Saturday night.  Timing, however, varies some amongst models and it is too soon to talk details.  Stay tuned and monitor official forecasts.
By Jim S Posted at 4/03/2018 08:41:00 AM