President's Budget a Disaster for Science and Education

Paraphrasing Mark Twain, money is for spending and budgets are for fighting over.

Most Americans would probably agree that federal spending needs to be reduced.  However, the President's Budget released yesterday takes a draconian axe to many science and education programs that are critical investments for the Nation.  The Scientific American summarizes the some of the cuts affecting science and education here.  I will discuss specifically cuts proposed to science agencies and programs that I believe will greatly slow progress in weather and climate prediction.

My science career now spans nearly 30 years and for that entire time I have received support from the National Science Foundation (NSF).  I consider NSF to be the gold standard of science funding agencies.  They support research projects initiated by scientists and are probably the most "organic" funding agency for science and engineering research.

The Trump Budget reduces NSF funding from $7.5 billion to $6.7 billion, which would fund 800 fewer research proposals.  The largest cuts would be in Social and Behavioral Sciences (10.4%), Computer Sciences (10.3%), and Geosciences (10.1%).  The research in those areas is very broad in scope and impact, but amongst the benefits are advances that ultimately improve the protection of life and property from natural hazards from winter storms to tsunamis.

Perhaps the most nonsensical cut is a reduction of $5 million to delay the development of the Next Generation Global Prediction System (NGGPS) and other related weather prediction projects. 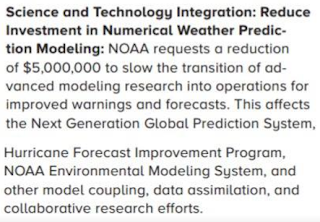 These weather prediction projects have bipartisan support in Congress because they are a good investment for national security and resiliency to high-impact weather.  The NGGPS involves the development of a new global weather prediction system designed to accelerate forecasts of critical weather in the United States.  Such a system would also greatly benefit the private sector, which relies heavily on computer models for all sorts of applications in the transportation, energy, agricultural, and other economic sectors.

In summary, the President's budget is a disaster for science and education, the Nation's intellectual capital, and technological innovation.  It is a pathway back to the dark ages, not the future.

Disclosure: The author currently receives research funding from the National Science Foundation, NASA, National Oceanic and Atmospheric Administration, and Office of Naval Research.
By Jim S Posted at 5/24/2017 09:01:00 AM