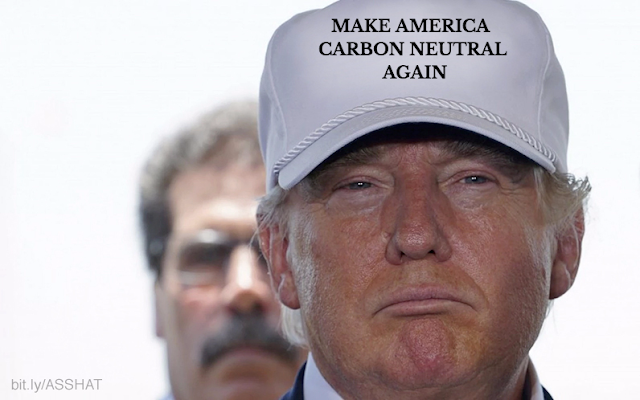 The media is abuzz with reports that Trump is going to withdraw from the Paris Agreement.  This isn't really a surprise since he's consistently said he would do so and every action he's taken as President is consistent with doubling down on fossil fuels.

Let's ponder those numbers, although there are a few challenges to doing so.  Incredibly, preindustrial isn't defined in the Paris Agreement (a major oversight), so we need to think about it for a bit.  Scientifically, we wouldn't want to pick a single year because in any one year, natural climate variability, volcanic eruptions, and other factors might make that year anomalous.  For example, 1884, the year after the eruption of Krakatoa, would be a terrible year to chose as it was anomalously cold.  Thus, we need to pick a period, preferably at least 30 years if not longer, not characterized by anomalous warmth or cold.

However, there is another challenges.  As one goes back farther in time, instrumented records are less numerous, decreasing the reliability of global temperature estimates.

A forthcoming article in the Bulletin of the American Meteorological Society by Hawkins et al. (available here as an early online release but paywalled without subscription) concludes that 1720–1800 is perhaps the best period in terms of it predating measurable human influences on global temperatures.  They then use a variety of approaches to estimate the warming since the pre-industrial period and show that 2015 was likely the first year in which the globally averaged temperature was more than 1ºC warmer than preindustrial temperatures.  Their analysis did not include 2016, but it also exceeded the 1ºC threshold.

There are considerable ups and downs, however, in global temperatures from year-to-year.  These ups and downs are generally in the range of 0.1–0.2ºC.
Therefore, the fact that 2015 and 2016 were so warm doesn't mean we've necessarily eclipsed the 1ºC mark for good.  We might lose a little ground for a couple of years.  Nevertheless, we are probably in a period in which we are approaching a long-term globally averaged temperature that is close to 1ºC above preindustrial.

That puts us close to half way to 2ºC, with some warming still in the pipeline since the Earth is still responding to the rapid increase in greenhouse gases over the past few decades.  But why 2ºC?

The 2.0ºC limit stems from the recommendations of a 1980s World Meteorological Organization (WMO) group that considered 2ºC to be "an upper limit beyond which the risks of grave damage to ecosystems, and of non-linear responses, are expected to increase rapidly." Others have argued for a lower limit.  I don't know any scientists arguing for higher, but you can probably find a few.

The reality is that there is no magic tipping point at which global temperatures become "dangerous." Different regions, economic sectors, and ecosystems have differing sensitivities to the rate and magnitude of the temperature increase and we aren't able to understand and identify these precisely.   1.99ºC isn't good and 2.01ºC isn't bad.  Some responses to climate change are appearing already (heat waves) and will worsen further.  Others have yet to emerge.  Some are beneficial.  However, our society is built around the climate of the 20th century, not the 21st, and as the planet warms, most impacts of climate change will be problematic and not increase linearly, but nonlinearly with temperature.  Given that we are currently near a 1ºC increase, I view 1.5ºC as a "stretch goal" and 2.0ºC a realistic scenario for what we could achieve in terms of reducing greenhouse gas emissions and managing the risk posed by climate change.

Ultimately, my views on the Paris Agreement are informed by science, but also influenced by my personal values.  I'd like to see the US be a leader in efforts to tackle global warming, and I think the Paris Agreement contributes to such leadership efforts.  However, tangible and substantial steps to decarbonize energy production are also essential.  The good news is that US energy-related carbon emissions have declined in recent years due to many factors, including a migration from coal and oil to natural gas and renewables for energy production.  States like California will likely continue to pursue policies and actions that reduce carbon emissions, as will many cities.  However, the policies of the Trump Administration run counter to these efforts and managing the risk posed by climate change.  Withdrawing from the Paris Agreement would be another step in the wrong direction.
By Jim S Posted at 5/31/2017 05:13:00 PM