Prediction: Snowbird Will Not Be Open for Skiing in July

Many people are wondering if Snowbird will be open for skiing in July.  The cryospheric and meteorological evidence suggests that the answer is no.

Data from the Snowbird SNOTEL hasn't come in since May 26th, so we'll lay the groundwork for this analysis with a little guesswork.  On May 26th, the Snowbird SNOTEL had 42.1 inches of water in the snowpack, but during the previous 3 days, they lost an average of about 2 inches a day.  That's a typical melt rate at that elevation on warm spring days.   Assuming continued melt rates of 2 inches per day, the station would probably be sitting near 30 inches today (steep thick green line that I've annotated).  It was, however, a bit cooler over Memorial Day weekend, so maybe melt rates wouldn't be so high, so instead perhaps they are around 37 inches (less steep green line).

In either case, that's still an above average snowpack, but at typical late spring melt rates, which are likely given medium-range forecasts, that location is probably looking at melt out by mid June.  Of course that's only mid mountain, so maybe we should dig a bit further.

The last season Snowbird was open until July was 10/11.  You get an idea of just how anomalous that year was from the graph above.  In 10/11, the snowpack at the Snowbird SNOTEL was still at its maximum water content on June 1st.  On that date, the snowpack water equivalent was 75.1 inches, basically double what we have currently.

Here's another way to "look" at it.  The photo below is from the Hidden Peak web cam at Snowbird today.

And here's one from a Youtube video taken by toxxmaster on July 2, 2011. 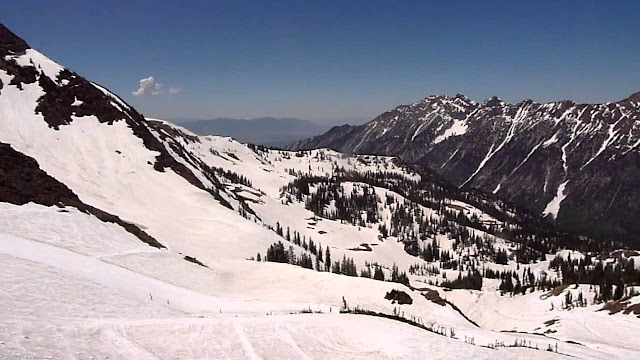 They aren't a perfect match, but they are actually pretty similar, although there's probably a bit less coverage on July 2, 2011.  That is roughly consistent with the SNOTEL data.  If we sit between 30 and 37 inches of water equivalent today, that's about where we were on June 25–27, 2011.

Snowbird has been open on the 4th of July in two other seasons, 94/95 and 04/05.  Both of those years also had a fatter snowpack on this date than this year.

So, I think the odds of lift-served skiing on the 4th of July are quite low.  Then again, one only needs a patch of snow and some economic and marketing will.  After all, there were people waiting in line in Vermont for first tracks at Killington this morning.