As of yesterday, the Brian Head in southern Utah was the 8th largest fire in the state since 2003.

The National Interagency Fire Center reports that the fire started approximately 12:13 PM on Saturday June 17th and that the cause is still under investigation.  Their situation report issued at 5:30 MDT this morning reports a size of 42,800 acres, with 1,140 personnel working on the fire, plus 11 helicopters.  Twenty six structures have been lost.

Images below are provided by the MODIS imager on NASA's TERRA satellite, which flies over the area in the early afternoon each day.  One can see a smoke plume, likely associated with the nascent fire, on 17 June.  Media reports suggest that increased wind from the southwest winds caused the fire to jump a line on the evening of the 20th, after which the fire grew rapidly.  An impressive smoke plume is evident on subsequent days.

If you click on the image for the 22nd of June, you can see the top of a distinct pyrocumulus cloud, a cumulus cloud produced by the release of both heat and moisture into the atmosphere by the fire.

Apparently some progress was made by firefighters yesterday, but today looks challenging, with above average temperatures and increasing southwesterly flow.  The NAM forecast for 0000 UTC (1800 MDT) this afternoon shows 700-mb (10,000 ft) temperatures above 16ºC, which is probably 3-5ºC above average, and moderate southwesterly flow in advance of a trough over central Nevada. 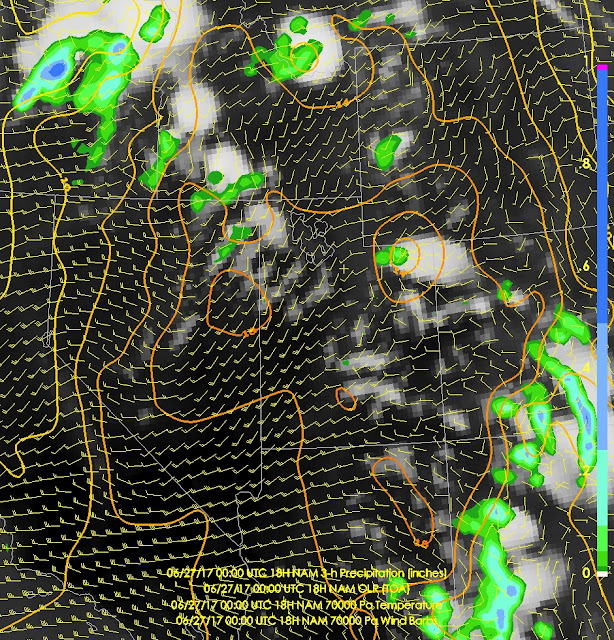 The expected outlook this morning states that "in the next 24 hrs could have active crown fire along northern flank with the return of the southerly winds. Potential spread distance 2-3 miles."