Relief Is in Sight!

As far as the first week of June goes, there's never been a hotter one in Salt Lake City based on data from the National Weather Service.  The mean temperature for the period this year is 77.4ºF, topping last year by 0.8ºF.  Both years are out there on the long-skinny tail of the distribution as the next warmest year, 2006, was 74.3ºF.

Relief is in sight, however, in the form of a pocket of cold air, presently over the North Pacific, that will move in here over the next several days.

Relief, however, looks to come in spits and spurts as the system pivots its way in here.  Yesterday looks to have been the peak of the heat.  Today will be a couple degrees cooler and tomorrow a bit more.  After some ups and downs, the cold air looks to be here in earnest early next week.  Right now it looks like a total decline in temperatures of about 18ºC at 700 mb (10,000 feet) from yesterday through early next week over northern Utah.

Yesterday's high at the Salt Lake Airport was 98.  Weather.com is calling for 63 on Monday.

While we may flirt with some mountain snow showers here, there might be some real accumulations at upper elevations of the Tetons and and the mountains of Idaho and Southwest Montana.  It's too soon to be talking specifics, but for "entertainment purposes" let's take a look at the downscaled NAEFS snowfall product, which give decent odds of > 6 inches total accumulation for the next 7 days in some areas.  Most of this snow comes in a few days.

Here's the plume for Big Sky. 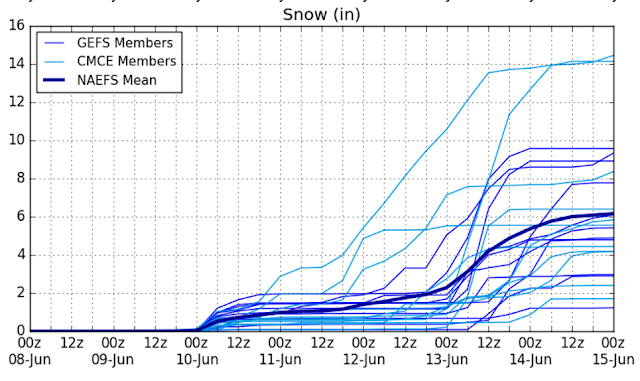 And if you must, Alta-Collins. 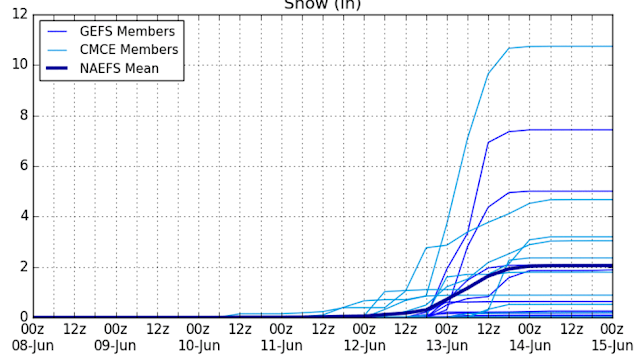 Most members are calling for zilch to flurries, but hey, it's really damn hot out, so I find it soothing to look at the possibility of a few inches, event if it is a low to modest probability.