An addendum has been added to the end of this post concerning uncertainty about the source of the smoke or dust over the Salt Lake Valley this morning.

A weak trough passage last night has brought smoke into the Salt Lake Valley, along with a little lake stink.

As far as troughs go, this one was about as weak as it gets and barely put a dent in the near-surface flow.  The trough is, however, more easily seen in upper air (700mb, about crest level) analyses, with the pronounced wind shift moving across the Salt Lake Valley early this morning.

Thus, the smoke is not from the Brian Head fire, but more likely originates from one of the large incidents to our west and northwest over Nevada and Idaho.

Speaking of the Brian Head fire, lets take a few moments to talk a little bit about the meteorology leading up to the event, motivated in part by comments concerning yesterday's post.

Snowfall last winter was impressive in the Brian Head area, leading to an above-median peak snowpack.  However, the ensuing meteorology of the spring has led to very high to extreme fire danger over the region.

To illustrate this, I've pulled data from two nearby SNOTELs at Midway Valley (9826 ft) and Webster Flat (9158 ft).  There are other SNOTELs in the area, but these had good data coverage and a long-term median.

Both show a peak snowpack water equivalent well above median.  There are really two major snowpack peaks at each site, one in early March, the other in early April, although the primary maximum is in early March at Webster Flat and early April at Midway Valley. 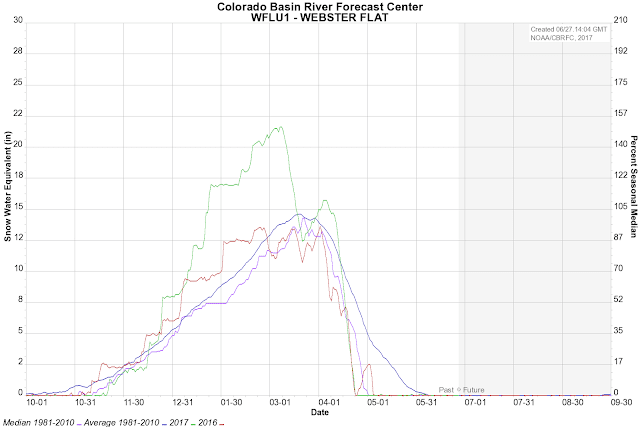 Although the snowpack at both sites was well above median, each site lost significant snowpack during the March heat wave that affected much of Utah and Colorado (dashing Spring Break powder skiing hopes).  Snowfall melt rates after mid April were also quite high.  As a result, the last day of measurable snowcover at Midway Valley was near median (late May) and at Webster Flat was about a week earlier than median.

Long-term observations from sites at high elevations around Bryan Head are somewhat scarce, but the time series from Bryce Canyon below shows that the period from March 10 to June 25th rated as the 2nd warmest on record since 1960.

There are, however, some missing days at that site.  Alternatively, we could look at Cedar City, which is geographically closer, but also much lower.  There, temperatures for the period rate as the 16th warmest on record since 1949.

Finally, we can look at precipitation and see that over the last 90 days, precipitation in the region was 50-100% of average depending on what pixel you choose from Cedar City to Brian Head.

It has been especially dry over the past month or so.  There has been no measurable precipitation in Cedar City since May 16 or at Bryce Canyon since May 11.

So, despite a fat snowpack in March and early April at upper elevations, snowmelt this spring was rapid, temperatures were above average, and precipitation was scant.  This has contributed to fire danger in the region that sits today over southwest Utah in the very high to extreme categories.

Addendum at 9 AM MDT:

Spectacular GOES-16 imagery from CIRA leaves me scratching my head about the source of the smoke (or maybe dust) over the Salt Lake Valley this morning. 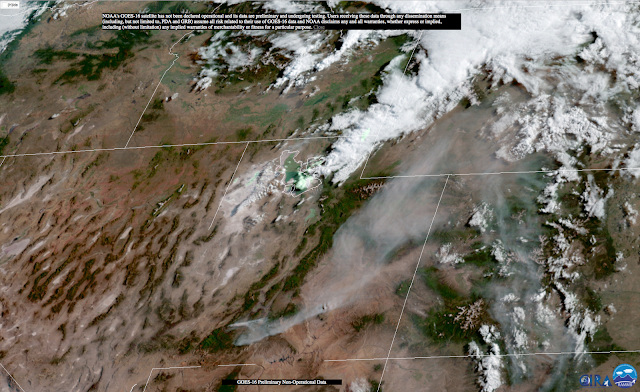 
Smoke aloft has moved into the Wasatch Front as northwesterly flow brings smoke from a fire to our northwest near Snowville. #utwx #GOES16 pic.twitter.com/cDNM69Pm4J
— NWS Salt Lake City (@NWSSaltLakeCity) June 27, 2017