GOES-16, previously called GOES-R, is a remarkable next-generation satellite that was launched in November.  Although not "official" yet, it has been providing remarkable imagery for several months.
GOES is short for Geostationary Operational Environmental Satellite.  Geostationary means that the satellite is in an orbit in which it remains over the same point on the equator, allowing it to repeatedly sample roughly one half of the Earth at all times.  GOES-16 offers several major advances over previous US geostationary satellites including higher spatial resolution (0.5 km for the 0.64 um visible channel, 1 km for other visible channels, and 2 km for longer wavelength channels), which equates to approximately four times as many pixels, more frequent images (every 5 minutes over the continental US and as often as 30-60 seconds over selected regions), and 16 spectral "bands."  Previous GOES satellites sampled only 5 spectral bands.  The increased number of bands will allow for a remarkable advance in the quality of the imagery and the detection of critical weather and environmental phenomenon.

A nifty site for playing around with GOES-16 imagery and animation is the Cooperative Institute for Research in the Atmosphere's SLIDER.  You can access imagery from both GOES-16 and the comparably equipped Japanes Himawari-8 satellite on this site.

Below is the GeoColor image from 1817 UTC (1217 MDT) this afternoon (click to enlarge).  This is a truly spectacular product, leveraging the GOES-16 capabilities to provide remarkable images far beyond the old black and white imagery of the past.  I've highlighted a few features including the Brian Head fire smoke plume, standing water on the salt flats, and the lava flows in Craters of the Moon National Monument. 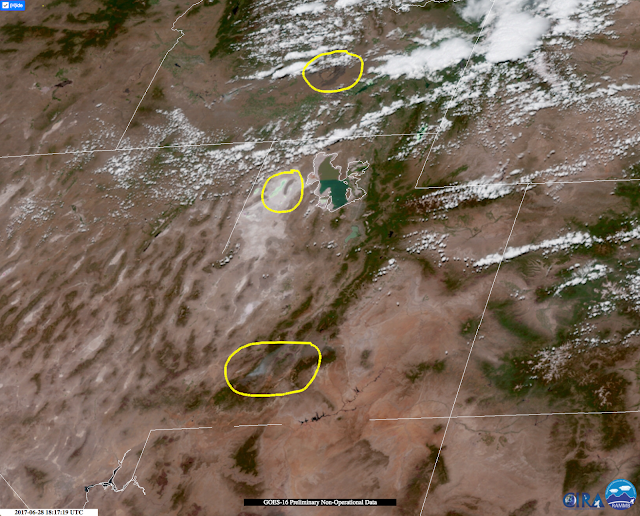 Everything points to GOES-16 being a revolutionary advance for weather prediction.  We will make extensive use of it in future posts.
By Jim S Posted at 6/28/2017 12:59:00 PM