Is This the Beginning of the End?

As we discussed a few weeks ago, the ski season is never over until it's over.  That being said, we are probably very close to the "beginning of the end."

By beginning of the end, I mean the onset of the rapid decline in snowpack on upper-elevation northerly aspects.

The low-elevation snowpack already suffered a premature death in March with the beginning of the end produced by the unseasonably furnace-like temperatures we experienced in the middle of the month.

The snowpack at mid-elevation and relatively sun exposed upper-elevation areas has, however, been able to stave off the beginning of the end for a remarkably long period of time.  For example, peak SWE at the Mill-D North SNOTEL was reached in early March.  Since then, there have been two melt periods, each followed by an accumulation period.  The most recent peak in SWE, achieved on May 1, was just a bit below the early March peak. 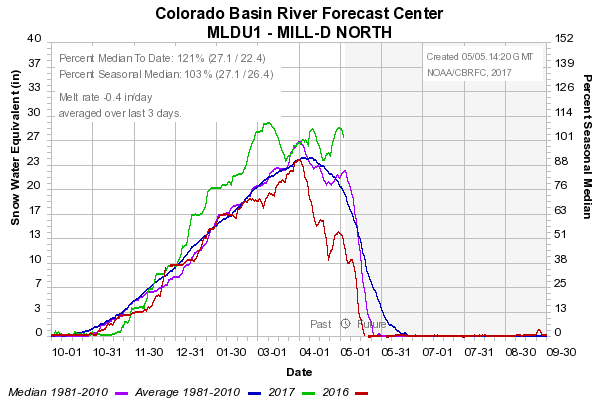 At Snowbird, which benefits from both elevation and north aspect, we now sit at the peak SWE.  That's not unusual.  On average, peak SWE at this site is achieved in late April. 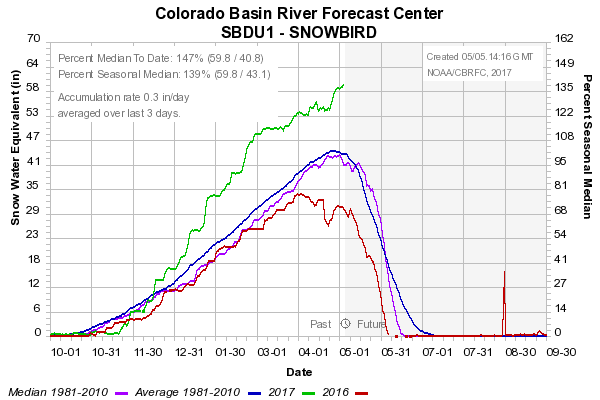 The net loss of water in the snowpack has yet to begin there, but I suspect the snowpack is close to ripe and that we will see a downward trend starting today or tomorrow.  Although I won't rule out more snow in the next couple of weeks, I suspect that we are now at peak SWE for this site.

One other quick note.  The Utah Avalanche Center is no longer issuing forecasts, but noted yesterday on instagram concerns about avalanches over the next few days.

Corn conditions have provided good riding this week, but the next few days will be warm, and overnight temperatures will remain above freezing. This means wet avalanches are possible over the next several days. This includes upper elevation north aspects where wet slab avalanches are possible. Glide avalanches remain a concern in Bog Cottonwood including Stairs Gulch, Mill B South, and Broads Fork. #utavy
A post shared by Utah Avalanche Center (@utavy) on May 4, 2017 at 2:19pm PDT


The overnight minimum temperature at Alta-Collins (9600 ft) was only 41ºF last night.  If there was a freeze of the snowpack, it was extremely thin and shallow.  Temperatures today at that elevation should reach well into the 60s.

Unfortunately, we have had late-season fatalities in the Wasatch Range under similar conditions.  In late April 2001, two climbers were killed by a likely glide avalanche in Stairs Gulch.  That April had been snowy, and was followed by a rapid warming.  The night of the accident was especially warm, with minimum temperatures in the 40s.  Bruce Tremper's accident report is worth a read if you are considering touring today or this weekend and is available here.
By Jim S Posted at 5/05/2017 08:54:00 AM