Lessons in Lightning Safety from Yesterday

Yesterday afternoon, a series of convective storms formed over or near the central Wasatch and moved northwestward toward Bountiful and portions of the Salt Lake Valley.

The first of these storms was near Parley's Canyon at 2059 UTC (1459 MDT) and organized in a line. It looked like a close call for the University of Utah to receive rain, as well as thunder and lightning. 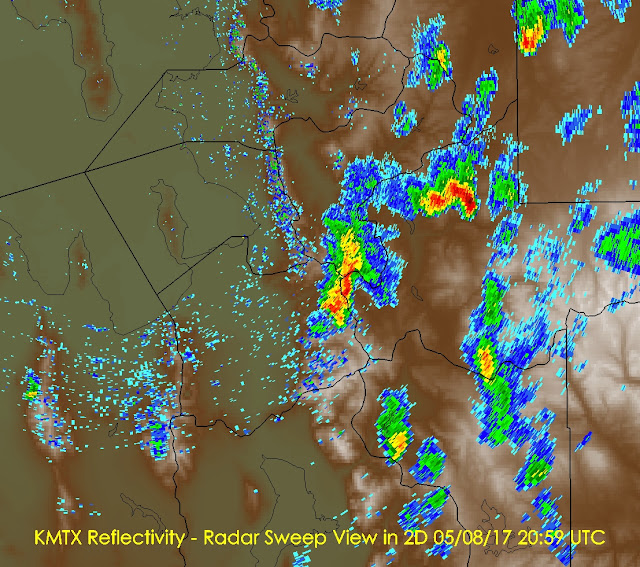 Over the next 13 minutes, the storm shifted northward and became more cellular in structure.  By that time, it was northeast of campus and we had missed out on any significant precipitation. 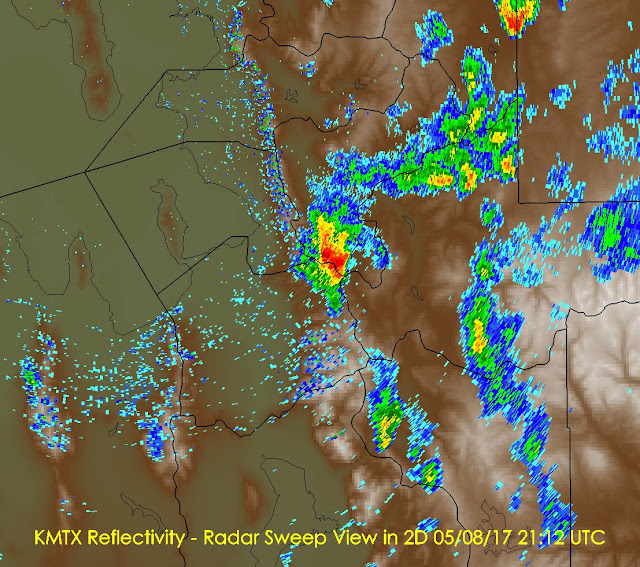 However, it is important to realize that threats from lightning can often extend many miles from the rain shaft and indeed, that was the case yesterday.  I was taking the occasional glance at the wonderful lightning products at lightningmaps.org and noticed a strike not only on Little Black Mountain close to the storm, but also in the mouth of City Creek Canyon, not far from downtown. 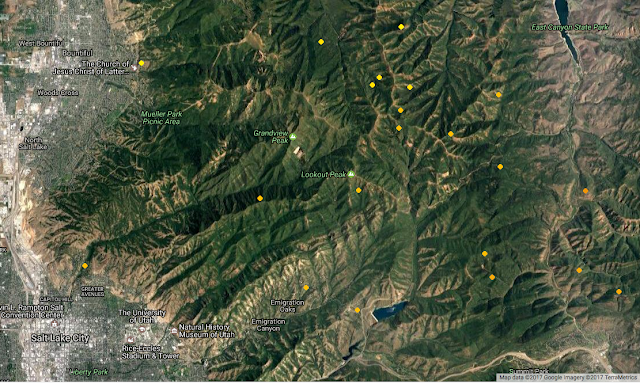 That strike illustrates that lightning can strike outside of the rain shaft, sometimes 10 miles (or in some instances more) from the storm.

Now there is some possibility that there is an inaccuracy in the data, but lightning studies have shown that strikes up to 10 miles from the rain shaft in the absence of rain happen.  If you can hear thunder, even if it isn't raining at your location, you should move indoors.  If you are at a sporting event, move into your car.  In the United States from 2006 to 2016, there were 31 lightning fatalities during sports-related activities, with the most at soccer events, followed by golf.  Many more are injured.

Note that picnic shelters, dugouts, and porches are not considered lightning safe.  Move to a substantial building or a hard-topped automobile if you are at an outdoors sporting event, rock concert, whatever.

For outdoors oriented people like myself, it's best if you can rearrange your schedule to recreate when lightning is not a concern.  We did this yesterday as we waited until late evening to hike in the Avenues foothills.  There are times, however, when you can't wait or find shelter.  I've had some miserable and scary experiences hiking and backpacking during thunderstorms.  In fact, I became a meteorologist in part because of a miserable storm night my dad and I had in the Adirondacks when I was a teenager.  In these instances, the goal is to reduce the threat.  This involves:


Now I'm no "angel" when it comes to lightning safety.  I've sat too long on my porch or have tried to squeeze in a workout when I shouldn't on several occasions.  Being human is hard.  Nevertheless, it's a good idea though to practice good lightning safety practices and minimize risk as much as possible.
By Jim S Posted at 5/09/2017 08:26:00 AM

Email ThisBlogThis!Share to TwitterShare to FacebookShare to Pinterest
Labels: Lightning