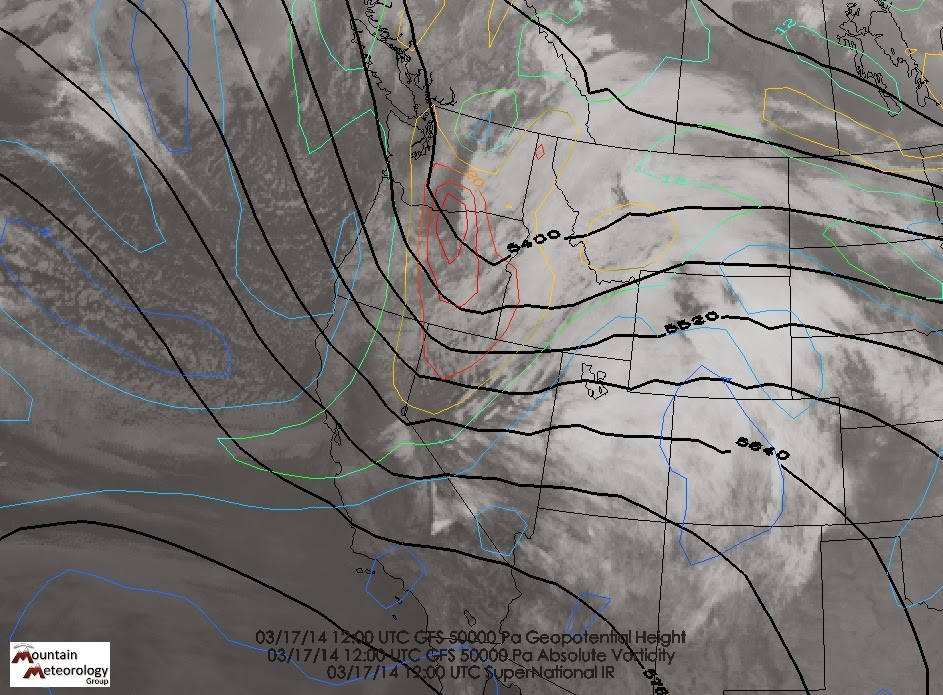 Although we have had a number of spring-like storms over the past few weeks in terms of warmth, high snow levels, and valley rains, I'll call today's event the first "spring trough" of the season.

Short-wave troughs like the one approaching us this morning (see above) are a dime a dozen, but they pack a stronger meteorological punch in spring rather than winter.  The reason for this is surface heating, which is stronger in the spring and creates a less stable lower atmosphere, allowing for stronger coupling with systems aloft.  This is why we see stronger surface cyclones and cold-frontal passages in spring rather than winter.  Further, the strong winds accompanying these systems can frequently lead to dust storms that can lead to poor visibility and air quality in lowland regions and darken the snowpack in mountain regions.

Today's system has a lot going for it.  It's a fairly strong short-wave trough with a monsterous 700-mb temperature contrast of 20ºC from central Utah to western Washington (see lower left).  It also has a strong post-frontal pressure gradient and winds.

The only thing it is lacking is timing.  The most dramatic spring cold frontal passages typically occur in the afternoon or evening, so that the pre-frontal environment can warm during the day.  Instead, we're going to see the cold air pushing in this morning.  Nevertheless, it is going to be an impressive event. Strong winds and colder air will be moving in this morning (The National Weather Service has issued a high-wind warning for Salt Lake City and many other areas of northwest Utah - see http://www.wrh.noaa.gov/slc/ for further information).  Expect "lake stink" this morning and then some snow this afternoon with up to an inch in the valley.  Yesterday's sunny skies with a high of 67ºF will seem like a distant memory today.  Those of you who didn't check the forecast and wore shorts today are in for a fun afternoon...
By Jim S Posted at 3/17/2014 08:04:00 AM