Tribute to Harold Ramis and a Challenging Forecast

Today's post goes out to Harold Ramis, who passed away in late February.  Ramis wrote or acted in many of the great comedies of my youth including Meatballs, Animal House, Caddyshack, Stripes, and Ghost Busters.  If I'm killing time flicking channels and find one of these movies, I'm hooked until they are over and my kids roll their eyes as I recite every line by memory.  Dean Wormer's lecture to the guys from Delta House is one of my favorites, and I enjoy it even more now that I've been a professor and a Department Chair.

I thought of Ramis because he wrote Groundhog Day, the movie in which Bill Murray's character is a weatherman who experiences the same day over and over again.  On the large scale, the system we have rumbling into Utah is a bit of a repeat of the previous one in that the upper-level trough and attendant cold front are rolling over and through a long-wave ridge.

On the other hand, the system is stronger and, although it is currently warm, the post-frontal environment should be colder and a bit more active.  Places like the Cottonwoods will probably get more snow and it will (eventually) be of a lower-water-content variety.

Right now, the system is broken into pieces - the leading edge is entering northwest Utah, there's another area of scattered precipitation over central Idaho and northern Nevada, and then the meat and potatoes over the Pacific Northwest. 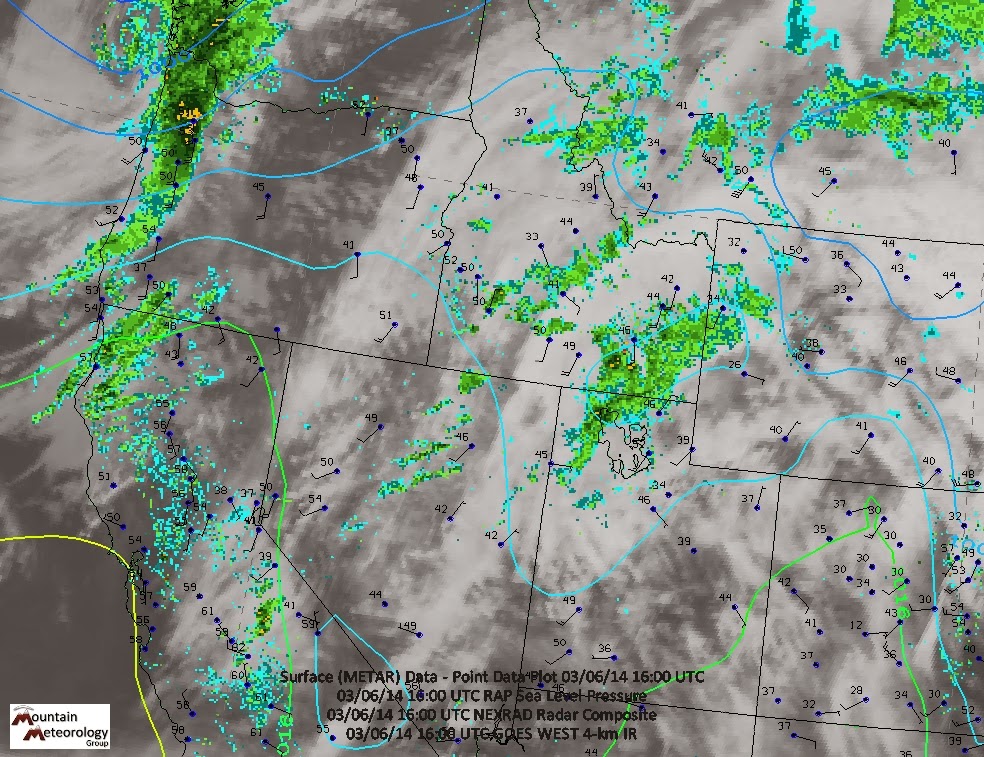 Although the regional radar image above doesn't look too impressive, both the NAM and GFS are calling for things to pick up nicely later today and give us about 0.75 inches of water and 8 inches of snow in upper Little Cottonwood, which should be start out as high density, but gradually transition to something a bit drier.

If that forecast verifies, the skiing should be pretty nice tomorrow.

This kind of forecast, however, always puts knots in my stomach.  The coverage and intensity of precipitation upstream isn't all that impressive until you get to the coast.  The beauty of our computer models and that they can develop or intensify storms in ways one might not expect from linear extrapolation, and sometimes they do this well, but going all in on such forecasts always makes me nervous (the fact both models are similar gives me a bit more confidence).  In addition, much will depend on the position of some of the precipitation bands that develop in the storm.  For example, the NAM goes crazy with a precipitation band this evening and, if that comes together, it needs to setup in the right place.

As such, I'm going to go with 6-12" in the upper Cottonwoods through noon tomorrow.  Although that's my best guess, this is a situation where I could see less or more depending on how things come together.  My personal strategy in these situations, especially since most of the snow will fall this evening and tonight, is to simply plan on getting up in the morning and making the call-in-sick decision based on the morning snowfall reports.  Since I can't ski tomorrow, if this storm gives us a decent dump, make some turns for me.
By Jim S Posted at 3/06/2014 11:21:00 AM