There's a saying amongst meteorologists that the severity of a storm is inversely proportional to the hype preceding it.

I've seen tweets about this weekend's storm and a possible pattern shift going back about 10 days.  However, at that time, and as recently as a couple of days ago, the ensembles produced a wide range of possible outcomes from very little snow to quite a bit in the central Wasatch.

The latest forecasts lean not toward a bit storm, but instead toward a solution with the heaviest heaviest precipitation going to our friends to the north including the Central Idaho Mountains and Teton Range.  We get a frontal passage and cooler air, but less precipitation.  For the 24-hour period ending 0000 UTC 12 Oct (1800 MDT Sunday), the ECMWF IFS gives valley locations in northern Utah only 0.2 to 0.3 inches of precipitation, which would fall as rain. 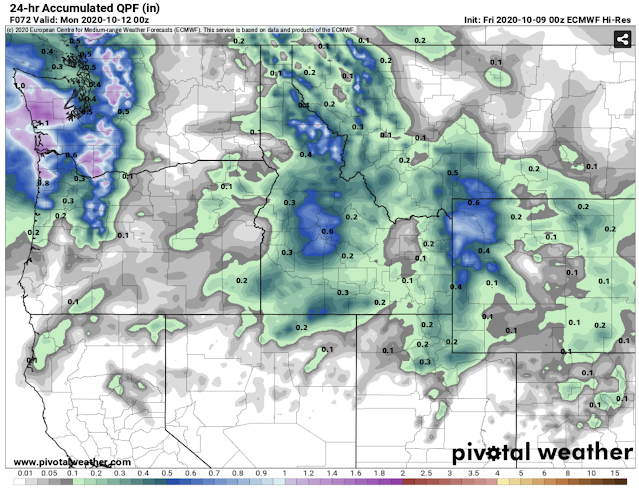 Source: Pivotal Weather
That's one of the wetter models.  The GFS is between 0.1 and 0.25" for the Salt Lake Valley with a bit more for the mountains.  After we downscale and apply our snow-to-liquid ratio algorithms, the GFS yields 2-4" of snow above about 7000 feet and 4-8 inches at the highest elevations of the central Wasatch.

The vast majority of downscaled ensemble forecasts favor a small event.  45/52 members of the NAEFS produce an inch or less of water and about 8 inches or less of snow for Alta.  6 members go for 1-2" of water and 12-18".  Then there's a plucky member of the Canadian ensemble going for over 50", but for reasons discussed earlier this week, discount that (I guess there's always hope).

We can also look at the Short Range Ensemble Forecast system (SREF).  Its numbers are in line with the majority of the NAEFS members.  All SREF members are under 1" of water and 10" of snow.  Note that both the NAEFS and SREF have some members producing scant amounts of snow (2" or less).

One shouldn't verify a forecast with a forecast, so we'll have to see how this ultimately ends up, but my view is it illustrates the importance of considering the full range of ensemble forecasts and not buying into any one possible outcome when several are presented.
Additionally, if you look at the NAEFS, notice how the accumulated precipitation and snowfall traces are generally flat after Sunday's storm.  Although we some changes in the large-scale pattern in terms of a strengthening jet and storm track, that's happening largely to our north and the models suggest continued ridge dominated weather.  Something might slip through the net, but for the most part, extended forecasts suggest the dice are heavily loaded for continued dry weather.
My view at this point is a best case scenario for Sunday would be some valley rain and very little mountain snow to allow upper-elevation hiking and biking to continue.  I think the odds of getting enough snow for skiing are nearly zero at this point, so a storm that lays down 12-18 inches would just be a waste.
By Jim S Posted at 10/09/2020 08:18:00 AM