Yesterday's southerly winds wreaked havoc in the West Desert with peak winds along I-80 topping 70 mph.  The public intormation statement below from the National Weather Service shows numerous stations with peak wind gusts above 50 mph in the Great Salt Lake Desert and Mountains, including 78 mph at I-80 milepost 29 and 73 mph at another I-80 site.

A look at the meteograms for I-80 milepost 29 shows that yesterday morning at 0800 MDT the flow was north-northwesterly.  This is consistent with the passage of the weak front discussed in yesterday's post.  The flow then veered (turned clockwise) over the next four hours, becoming persistently southerly and sustained between 25 and 40 mph from 1400–1900 MDT when the winds began to veer to southwesterly in advance of the front, which passed at just after 2000 MDT and was marked by an abrupt drop in temperature and dewpoint.

The time of peak gust was 1710 MDT.  A look at the sustained (red line) and gust (plus signs) speeds from 1400–1900 MDT suggests this was an unusual period.  In particular, the gusts were much stronger than the sustained winds at 1710 and the prior observation time 1700 MDT.  In other words, the ratio of gust speed to sustained wind speed maximized at this time.

It's unclear why this happened.  One possibility is that the stronger gusts reflects the influence of increased turbulent downdrafts associated with precipitation falling aloft.  Radar imagery at 1700 MDT (2300 UTC) shows some echoes in the West Desert area.  The surface dewpoint at this time was below 20˚F, so the potential for downdrafts as virga fell into this dry near surface air was high. 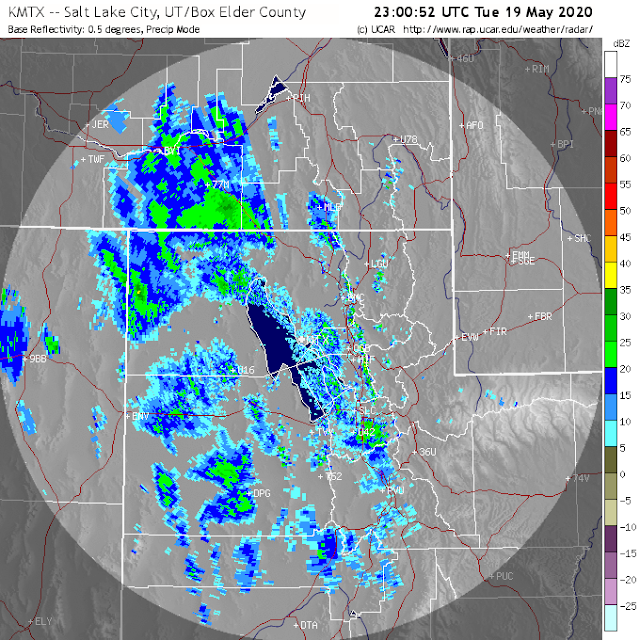 This is, however, just a hypothesis.  In any event, the strong winds and accompanying blowing dust led to the closure of I-80.  KSL reported that 4 semis were toppled.  Below is a photo provided to them by the Utah Highway Patrol of two tipped semis.

Given this wind-driven event, now is a good time for me to promote yesterday's PBS American Experience feature on Dr. Ted Fujita, better known as "Mr. Tornado."  Fujita was known for his meticulous and detailed storm analyses and pioneering research on tornadoes and other phenomenon.  He developed the Fujita scale for tornado intensity, which today has been updated to the enhanced Fujita scale (EF-scale).   I haven't seen it yet, but it was well received by colleagues.  The trailer is below and the full show is available at https://www.pbs.org/video/trailer-mr-tornado-american-experience/.

Email ThisBlogThis!Share to TwitterShare to FacebookShare to Pinterest
Labels: Wind