At around 1700-1800 MDT yesterday afternoon, a brief but violent dust storm or haboob swept through the Salt Lake Valley, degrading air quality and uprooting trees.

While there are many types of dust storms, haboob is typically applied to those with sharp leading edges caused by a density current or front.  It is often clear ahead of the density current, with opaque dust loading behind it.

I first noticed yesterday's haboob at about 1730 MDT when it had spread into the northwest Salt Lake Valley.  Looking toward the southwest at that time, a shallow layer of dust was evident at low levels and clearly confined to elevations below the crest of the Oquirrh Mountains. 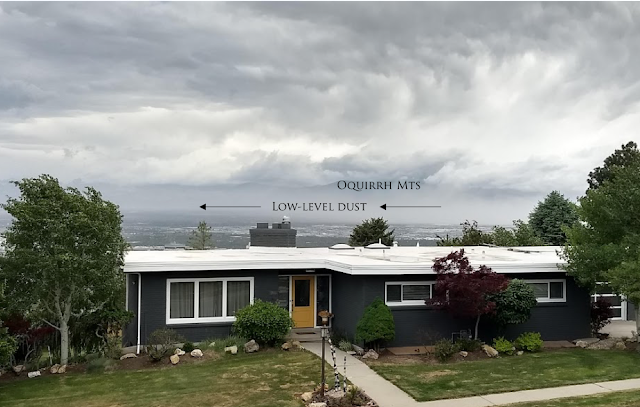 At that time, strong northwesterly flow was observed in the northwest valley as high as 40 knots at the Kennecott tailings pile just south of I-80 and as high as 25 knots at the Trans Jordan Landfill in the southwest valley near the base of Kennecott's open-pit mine (labeled Bingham Canyon Mine on the plot below).

Time series from the tailings pile show steady northwesterly to northerly flow if 5-10 knots from approximately 1000 MDT to 1500 MDT.  From 1500-1700 MDT, that flow strengthened and the temperature fell about 4˚F.  At about 1700 MDT, the haboob hit, with sustained winds increasing rapidly to 50 mph and gusts reaching over 60 mph.  The temperature also fell more dramatically.

Another perspective is provided below from the Neil Armstrong Academy just a bit further east and where there is a particulate matter sampler.  Here, one can see the Haboob passage isn't quite as abrupt, but still led to a peak in wind gusts to about 26 mph and apike in PM2.5 to 60 ug/m3, which is in the unhealthy for sensitive groups category, but not exceptional for such storms in Utah.  I've seen worse for sure. 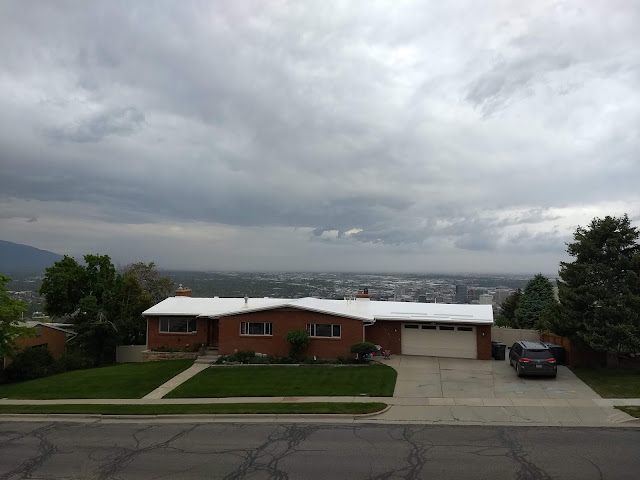 And below is a video showing the haboob surging across the southern Salt Lake Valley.

And, given Blogger's inability to adequately process video in some instances, here's a still.

Further analysis is needed to evaluate those hypotheses.

Further analysis is also needed to evaluate the origins of the haboob, but the analysis below shows that it wasn't a microburst.  Strong northwesterly flow is evident from the west Desert to the Wasatch Front.

Thus, this was a fairly large-scale feature, possibly enhanced by cooling beneath the frontal precipitation band that lagged the wind shift.

There were reports of wind damage with the haboob, such as the downed trees below in the Avenues.

I also noticed a report of downed power lines in West Jordan.

This morning we awake to a different scene with much colder temperatures and snow blanketed mountains.  What a relief to have rain!  However, if you don't like this weather, check out the NWS forecast below.  Climbing temperatures all week and a forecast high of 94 on Friday!