The numbers yesterday from the Salt Lake City airport were absolutely astounding.  With a maximum temperature of 98˚F and minimum of 76˚F, the average temperature was 87˚F, the highest ever observed in May at the airport.

The graph below shows the highest daily average temperature observed each May in Salt Lake City based on downtown-area observations prior to 1928 and airport observations thereafter.  There are two clear outliers in this record, 2003 and 2020.  They are only Mays in the instrumented record with at least one day with an average temperature above even 80˚F.

Weatherwise, yesterday was also remarkable in that it featured showers and thunderstorms that produced strong surface winds as precipitation cooled the dry low-level airmass.  Late yesterday afternoon, one could see virga and rain showers into that airmass, which in turn increased winds. 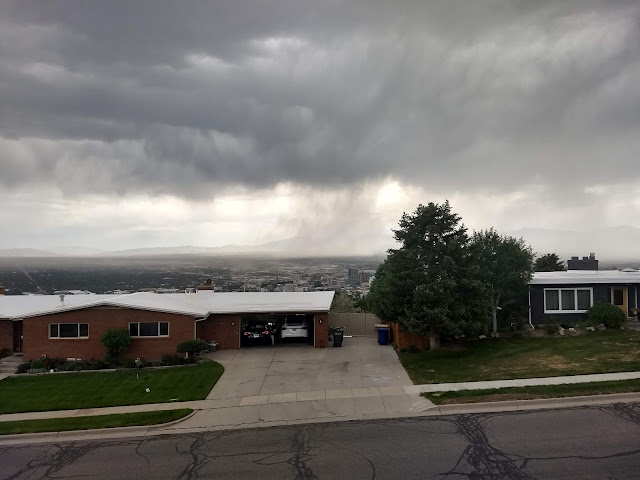 Stations in Utah reporting gusts ≥ 60 mph to MesoWest are summarized below.  Big Indian Valley is in southeastern Utah and I haven't had a chance to examine the causes of that report.  Camel Back Mountain at Dugway Proving Ground hit 91.  Simpson Springs in the West Desert 73.  Hill Air Force Base 68. 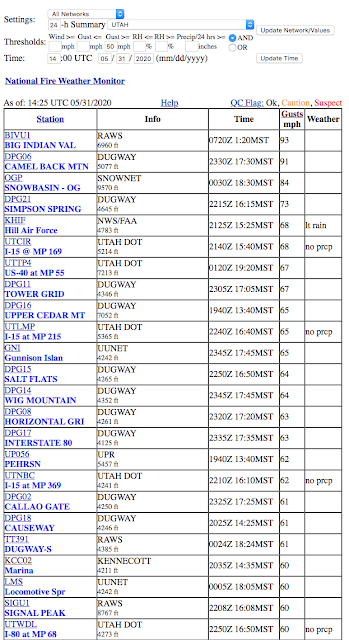 As if things aren't coming unglued enough, two wildfires started yesterday in northern Utah, The Tabby Canyon Fire on Stansbury Island and the 9th Street Fire near Ogden.  utahfireinfo.gov does not list the causes of these fires as I write this.  Lightning is a possibility, but I mention that not to rule out human causes, but simply to note that it can't be ruled out at this time.  There can be little doubt that their spread and behavior have been affected by the warm, dry conditions over recent weeks and the warmth, low humidity, and winds observed yesterday.