Saturday dawned here in Innsbruck with moderate rain in the valley, snow in the mountains, and flat light everywhere.  In Utah, that would mean storm skiing in aspens or sparse trees, but here in the Alps, with a cranky back, it meant looking for an alternative.

I elected to go up to Seefeld and do some skate skiing.  The timing was also right as the World Championships will shut down the portion of their track that is directly accessible via train from Innsbruck starting on Monday.

I wish I could say it was a beautiful day, but it wasn't.  It was foggy when I started, which lifted a bit leaving low clouds shortly thereafter. 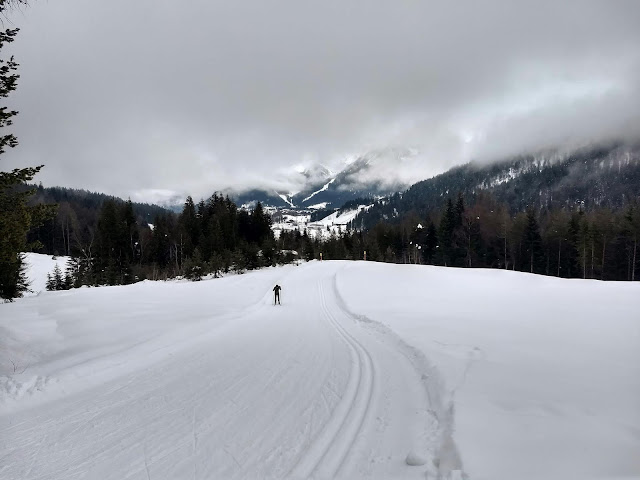 With a little bit of fresh and temperatures above freezing, the snow was as slow and sticky as it gets.  Add to that some basic rental skate skis and my pace was nearly twice as slow as it is on a good day in Utah.  I don't know who it is in the photo above, but like him, I struggled for much of the skate.  Downhill was like flats, flats like up, and up just painful.

There are, however, many rewards for suffering in the Tirol, such as arriving at a warm restaurant along the trail where you can enjoy suppe, brot, and a good rest. 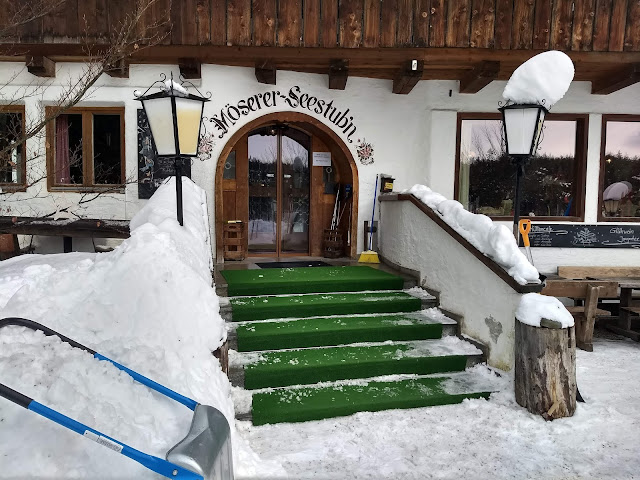 The stadium is coming together for the Nordic World Championships along the beginner track just outside of Seefeld.  Although flat here, some challenging trails are nearby and should deliver adequate suffering for the competitions.

I'm starting to learn the art of "grazing" through the day rather than eating a full lunch as there's always a treat nearby.  This is at the local grocery store after my skate.  Probably not even high class stuff, but good for the train ride home. 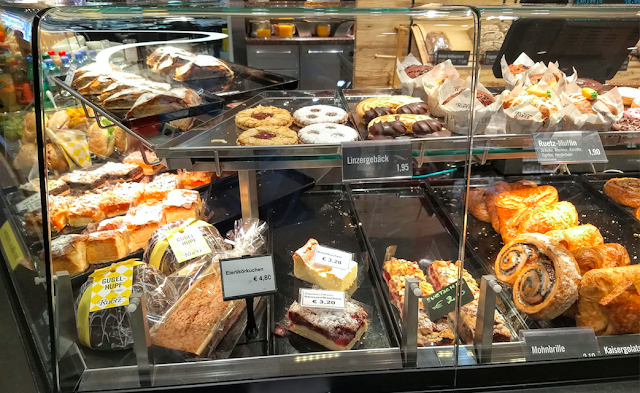 Seefeld is easy access from Innsbruck.  There are several trains a day and they drop you about 500 meters from the main trail system.  For casual skiers who need rentals, the Sport Edelweiss has great online reviews, good equipment, and treated me great.  Avid skaters who need rentals may want higher-performance equipment (I missed mine), although it's unclear where to find it.  I wished I'd at least brought my boots, but there's only so much equipment you can pack into two bags and a carryon for six months.

Today (Sunday) things are socked in again all around the area.