Adapting to a New Climate

The climate of the Alps is considerably different than the Wasatch and I'm having fun learning and adapting to it.

One thing that has struck me as how cloudy it is here in Innsbruck, at least since my arrival.  My posts have frequently featured pictures on clear days, but I assure you, there are periods when clouds prevail.  Often these clouds are stratus clouds, relatively low and confined to the cold pool within the Inn Valley as well as other low valleys in the region.

Last night we had a weak trough passage, depicted using 500-mb height contours in the loop below.  Accompanying the trough were mid and high clouds, as can be seen in the satellite imagery.

Also accompanying the trough were low-level clouds and moisture and, in the post-frontal environment, the view from my office this morning was overcast and grey. However, web cams above Innsbruck reveal a much nicer weather in the mountains, with undercast topping out at about 1000 m above sea level and just a few clouds at upper elevations. 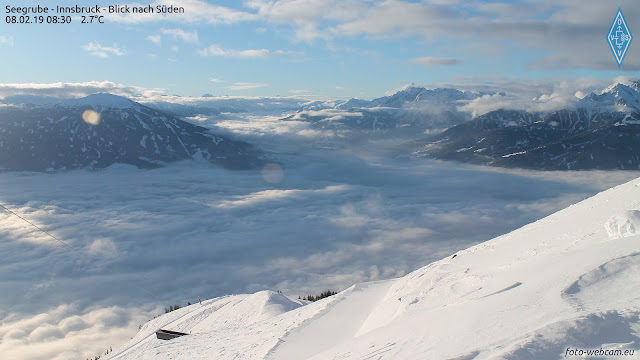 The photos above were taken around 8:30 am local time.  By 9:20, the clouds above mountaintop level had fully dissipated, but the clouds at upper-elevations were developing a bit more vertical extent as slope flows develop and the valley ventilates. 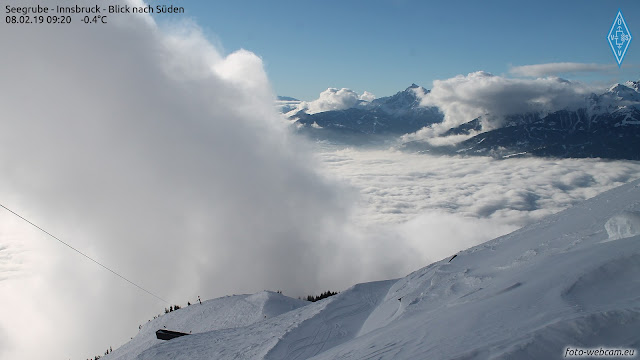 I've seen this a couple of times since arriving here.  Most remarkable is how grey it can be in Innsbruck, with clear skies seemingly hundreds of miles away, when they are only a few hundred vertical meters.  The experience is similar to a Salt Lake Valley Inversion, without the pollution, but without the buildup or longevity.  Thankfully, with a high density of web cameras throughout the region, it is very easy to ascertain where to go or climb for better weather.
By Jim S Posted at 2/08/2019 01:41:00 AM