US vs. European Weather Modeling

Much has been made about how U.S. numerical weather prediction, specifically our Global Forecast System (GFS), is lagging behind the European Center for Medium Range Weather Forecasting (ECMWF) global model, the Integrated Forecast System (IFS).  However, there is one major advantage of the GFS that is frequently overlooked.  It is free.  And, not only is it free, but it can be accessed anywhere in the world.

One can find, for example, the GFS on European weather web sites because it is freely available.  Typically only a small subset of the ECMWF model is available – what they freely provide.

In addition, while higher resolution models covering the continental U.S. are provided by the National Weather Service for free, including the NAM and the 3-km HRRR, this is not necessarily the case in European countries.

I noticed this morning that ZAMG, the Austrian National Weather Service, was providing temporary access to INCA, their integrated nowcasting system for providing short-range forecasts, free of charge due to inclement weather. 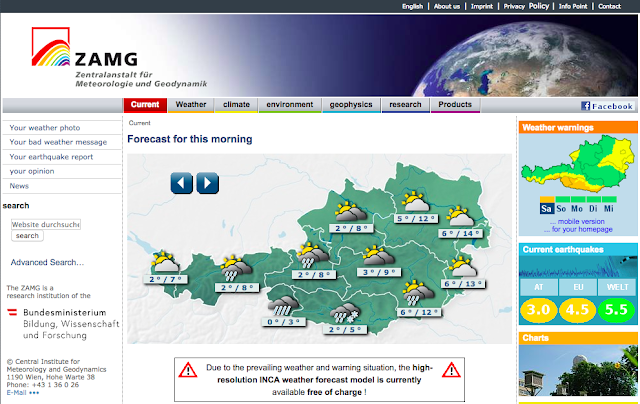 However, one doesn't always have access to that model, which is a very useful system for anticipating short-term weather changes in complex terrain.

Thus, access is one fundamental difference between modeling in the U.S. and some European countries.

Another difference is that European countries are relatively small in size, which has enabled many countries to produce their own high-resolution modeling systems.  About a year ago I sat down to try to get my arms around the number of operational modeling systems that are being run over portions of Europe (and northern Africa) at grid spacings of 3-km or less.  The 3-km threshold is approximately the grid spacing of the U.S. High Resolution Rapid Refresh (HRRR).  Below is a summary, first of modeling systems based on the HARMONIE-AROME modeling system, and then the COSMO, WRF, or UK Unified Modeling system. 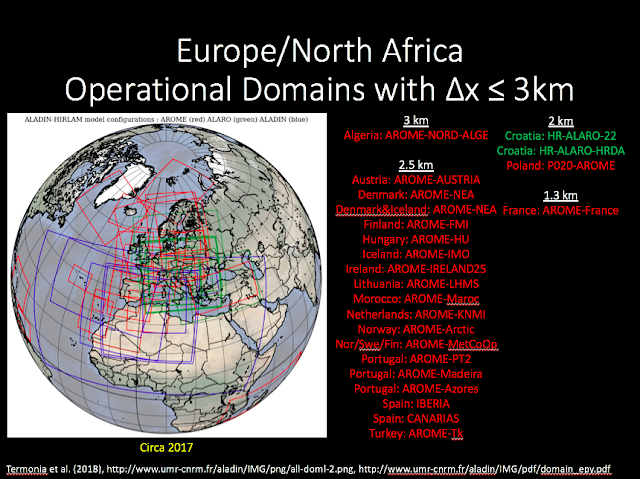 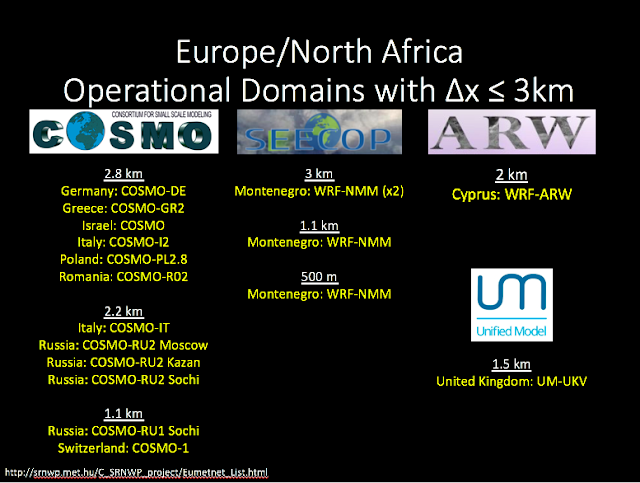 That's a lot of high-resolution forecasts.

The advantage of such an approach is that each nation can produce a high resolution forecast.  Consortiums have been developed to support modeling system development, which helps with the pooling of resources.  On the other hand, one is left without a full coverage high-resolution modeling system for all of Europe, which would be advantageous for many applications.

I lack sufficient understanding of the politics, economics, and weather enterprise here in European countries to adequately evaluate the merits of this approach.  Thus, I will table that for others smarter than me.  I will just highlight that the systems are different and that the free provision of modeling data from the National Weather Service, as well as our extensive observing network that includes satellites and radars, is not something that should be taken for granted.
By Jim S Posted at 2/02/2019 12:03:00 AM