Sometime in late 2000, the Salt Lake Olympic Committee asked me to go to St. Anton, Austria and learn about weather support and weather-related issues during the Alpine Skiing World Championships in February 2001.

This may surprise you, but I initially begged off of the trip.  I had attended the 1998 Winter Olympics in Nagano and didn't feel I'd learn much.  I suggested they send someone else.  They insisted.  So I got online to look up a bit more about St. Anton and found something that said it was a great expert ski area with a hedonistic night life.  I called them back and said that I would go.

It was a great trip.  I had never skied in Europe before and I learned a great deal interacting with venue managers for the Salt Lake Games and former ski team coaches.  Daron Rahlves won the Super-G and I clanked mugs with him at the bar that night (he wouldn't remember).  We stayed in an all-inclusive resort in St. Christoph on the Arlberg Pass that is otherwise beyond my financial abilities.  Skiing was done and fun was had.  I also gave a talk at the University of Innsbruck, which created the embryo for my current Austrian sabbatical.

St. Anton is remarkably easy to get to from Innsbruck.  It lies on the main rail line between Innsbruck and Zurich and thus has regular service.  If you catch a railjet express, it's a 70 minute trip. 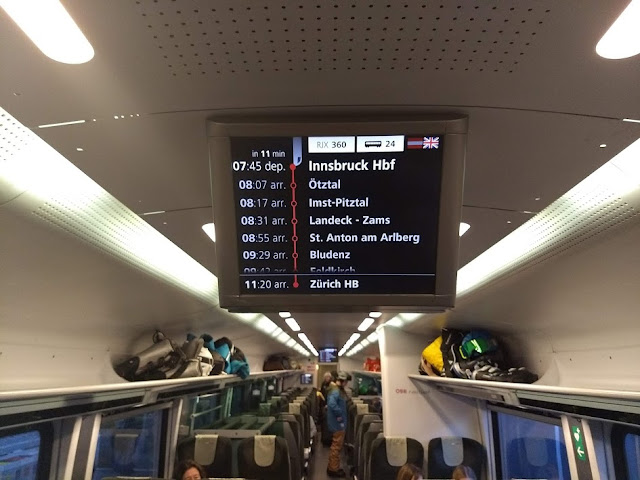 You just kick back, relax, and enjoy the views.  Then you pop out of the train station right at the resort, with about a 5-10 minute walk to the lifts. 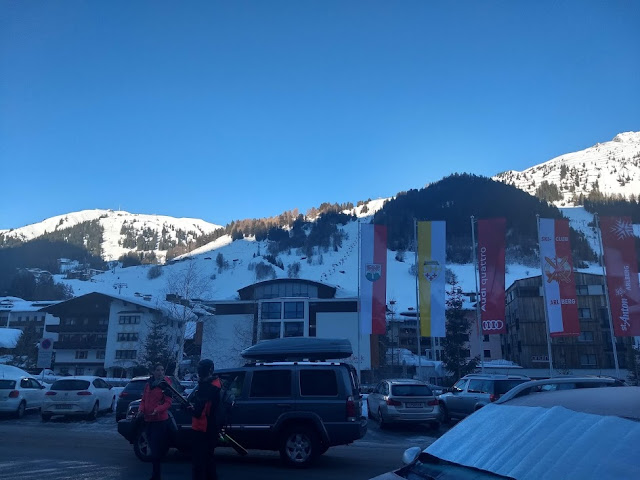 Although I say St. Anton, St. Anton is one of several ski areas that are fully interconnected and form Ski Arlberg, which they market as one of the five largest ski areas in the world with 88 lifts and cable cars, 305 km of piste, 200 km of "other runs" (whatever that means) and huge amounts of off piste acreage.  Vertical drop is nearly 5,000 feet, although this includes about 500 feet for the summit tram that they don't allow you to take your skis up.  Thus, about 4500 vertical feet is continuously skiable, although most of the time, you're not doing the full drop.

Our original plan, prior to leaving Salt Lake, was to cut that in half.  Ski from St. Anton to Warth, stay overnight, and return the next day.  That was a good plan, but naive for the Austrian winter high season.  If any lodging is available right now in the Arlberg region, especially for just one night, it's going to set you back a small fortune.

Following the advice of a friend and St. Anton native, we decided not to try and eat the whole elephant, but instead swallow a few small bites.  Thus, we ended up focusing on skiing the area very near St. Anton, including the Kapall, Galzig, Valluga,  St. Christoph, and Stuben area, leaving Lech and environs for another day.

The lift-served area around St. Anton has lots of great terrain, but a lot of south aspects.  As is common with the Steenburgh Effect, a large block has just setup over Europe and it has recently warmed considerably.  Spring conditions are now predominating on south slopes.  We found those runs hard and scratchy in the morning.  The best skiing was in the Stuben area where there are slopes on facing the north side of the compass.  Views, however, were spectacular everywhere.  Below are perhaps too many photos, but we found a hard time showing restraint.


We've learned that living in Innsbruck without a car requires a good system for schlepping ski gear.  Getting to the train station from our apartment requires a 10 minute walk, ride on a tram (i.e., light rail train) or bus, walking through the train station, etc.  Getting on and off sometimes crowded buses and paying drivers, stamping tickets, or flashing electronic tickets requires speed and dexterity!

By far, the most useful thing that we have are Voile and Black Diamond ski straps (shout out to both as I have a mixture of them).  These take up practically no space, but you can bind your skis and poles in a tight package that is a hell of at lot easier to lug around and load on and off buses and trains than if you have your skis and poles separate.  Put them on tight, and your poles provide a handle for carriage as well.  I've seen various contraptions for portering skis and poles here, but I think these straps work best.

When I'm touring, I just wear my AT boots, which are relatively easy to walk in, but if on Alpine gear, I throw a boot in my pack and strap one to the back as pictured above.  I find having a pack to be pretty useful for alpine skiing here as it's nice to have options to add or remove layers when covering distance and vertical.  We throw our shoes in it while skiing.

I'm not a quiver of one type of guy.  I've never found that the equipment that works well for uphill works well for skiing hard groomers.  I still prefer alpine equipment for resort skiing.  However, if I lived here, I would probably look for a beef AT setup that skis well at resorts just for the convenience when traveling.
By Jim S Posted at 2/16/2019 01:22:00 AM