The term Steenburgh Effect was not coined by me, but a friend and fellow meteorologist who is a frequent backcountry partner of mine.  There is of course no reason why my absence from Salt Lake City should result in greater snowfall.  The best explanation of why the Steenburgh Effect is a real thing is confirmation bias, the for humans to interpret things in ways that confirm their preexisting beliefs or hypotheses.

At least that's what I thought, but now I wonder.

Since I left town on January 15, Alta ski area has reported 121.5 inches of snow.  This is certainly one of the best stretches of snow since the epic 2010/11 winter.  Coincidence?  I think not.

Meanwhile, since my arrival in Austria, the spigot has closed.  Not completely as we've had some snow, but clearly my presence has had an effect.

The Steenburgh Effect is so strong that I am considering changing my Twitter handle from @ProfessorPowder to @ProfessorPiste.  I have been ski touring every Thursday morning since arriving here not in the Alpine backcountry, but up the groomed trails of the Patscherkofel, a local ski area at the end of the bus line that goes by our apartment.

Clearly there is a disturbance in the force as I've actually had fun ski touring in this fashion  Skinning and skiing a groomed trail!  There are a few reasons for this.  One is access, which is quick and easy.  Another is stupendous views, even this morning, when there were some high clouds around.

Then there is the restaurant at the top where one can sit and enjoy a spot of Darjeeling. 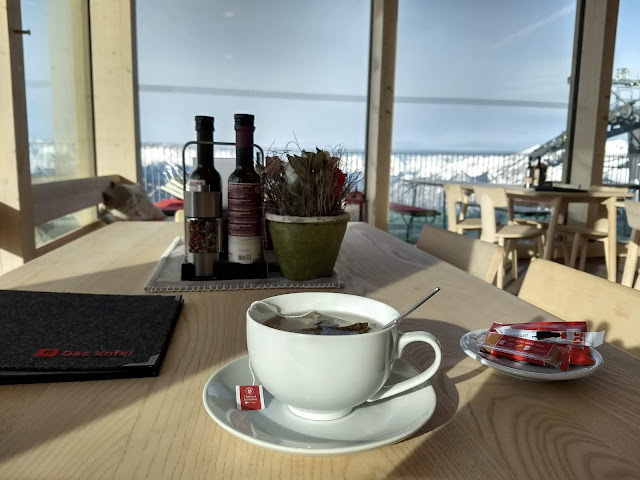