Since arriving in Innsbruck, I've been able to do some touring up the resorts but hadn't ventured into the Tirolean backcountry, so it was a real treat to be asked to join a group on a tour this weekend. Making the trip extra special was the group's international flavor, with people from France, Czech Republic, Croatia, Germany, and the United States.

The Wasatch are having a great season with a deep snowpack in both the lower and upper elevations.  Ditto for the northern Alps (i.e., north of the Alpine divide).  Although we weren't touring in an area with an especially deep snowpack, we still found impressive coverage at the trail head. 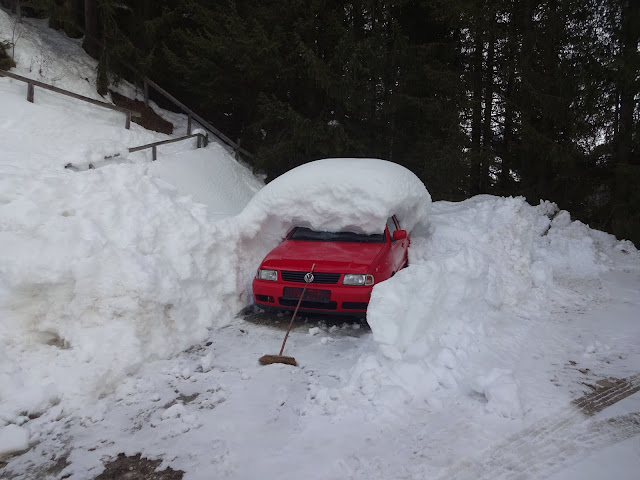 Our ascent covered about 1140 vertical meters.  As I have said many times since we arrived here, the Alps never disappoint on a clear day. 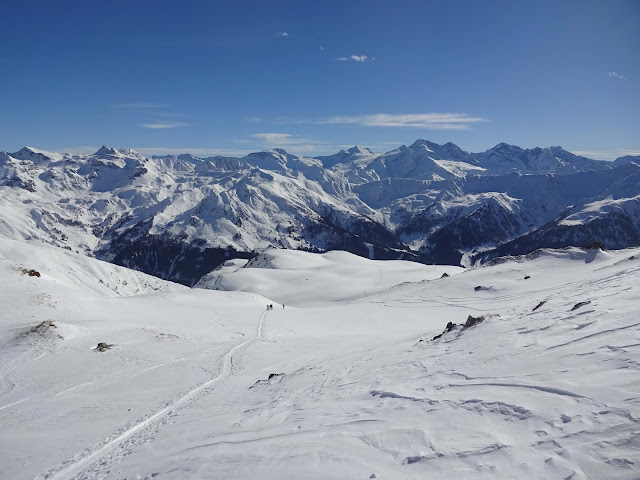 There's terrain everywhere around here, but also many avid skiers.  We found a small crowd on the summit, although we didn't see many on the trek up or down and had plenty of room for turns. 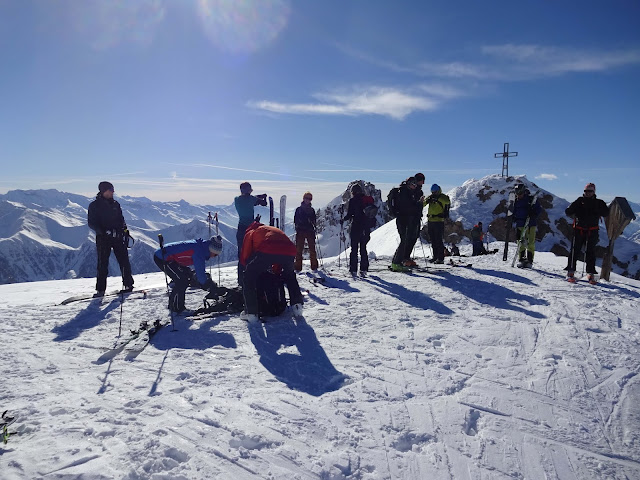 The U needs to get something out of my sabbatical.  Here it is.  Product placement at its finest. 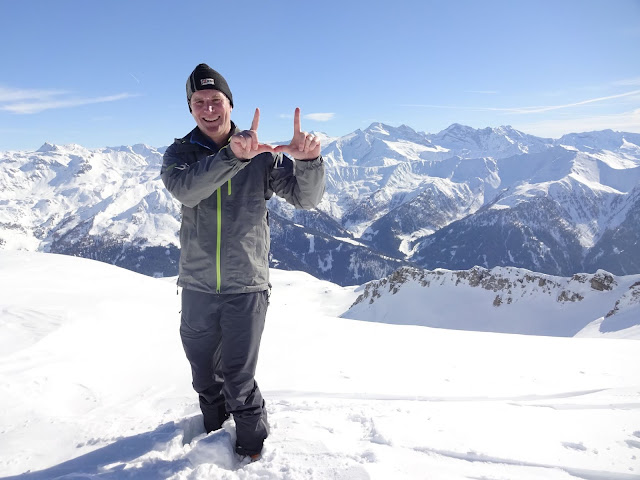 There was good settled powder in some areas, sun-damage in others.  Plenty of good turns to be had. 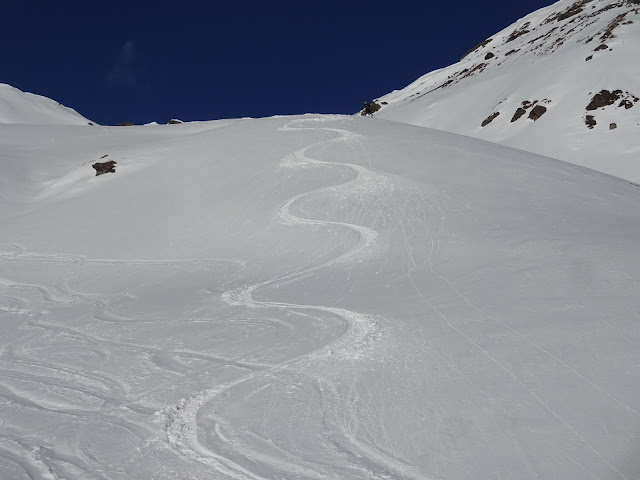 Yes indeed there is a robust snowpack in the Alps.  These farm buildings were nearly fully buried. 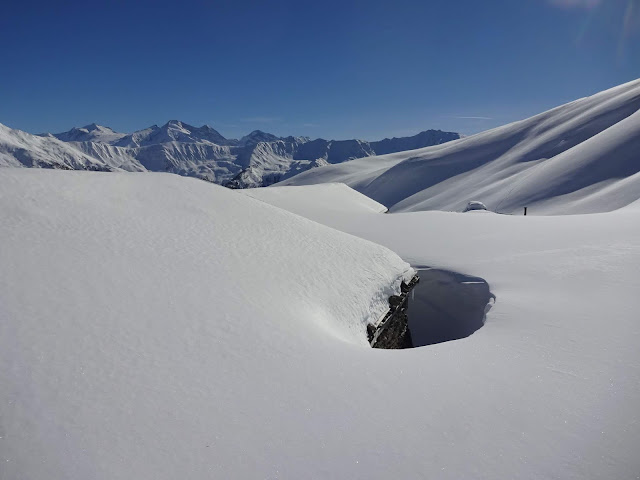 Every snow climate has its peculiarities.  A few days ago I saw evidence of a glide avalanche in the mountains above our apartment.  The area we were touring in had aspects on the south side of the compass and plenty of evidence of cracking and gliding along grassy surfaces. 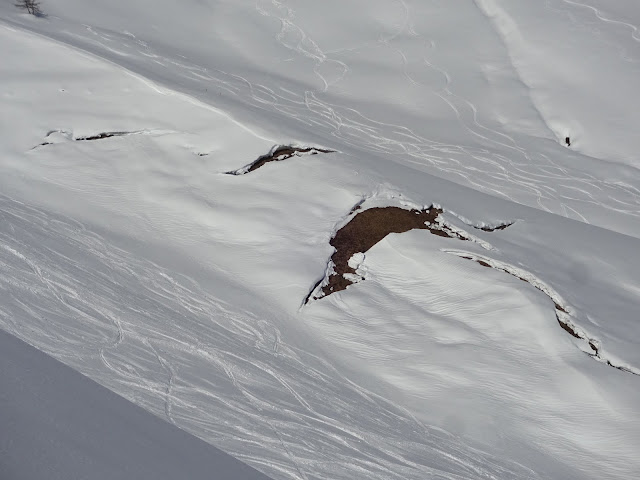 We saw some small slides on steeper grassy terrain along the access highway as well.  A good warning for warmer days ahead.

Working the aspects allowed one to find some nice powder. 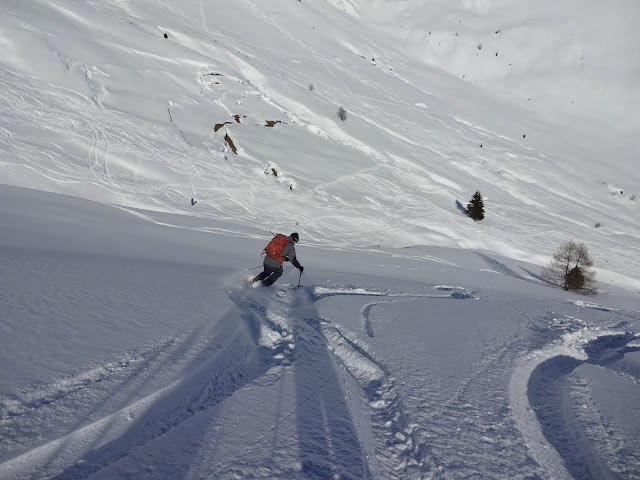 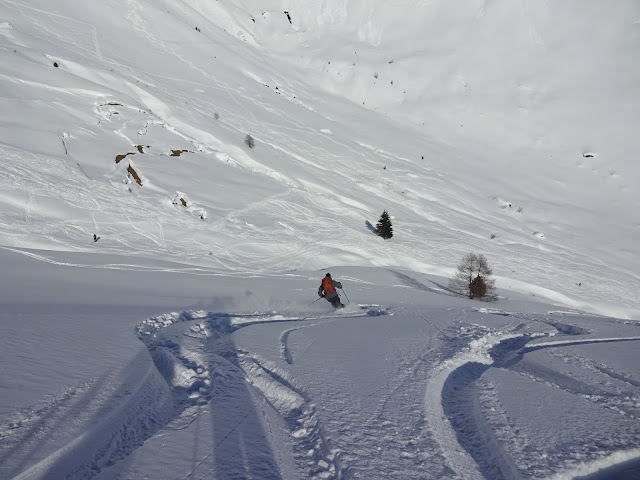 The valley we were in is accessed by a narrow road.  There is a small ski area that is bisected by the road and serviced by a T-bar.  You don't see this every day, but the T-bar actually crosses the road.  The skier you see in the photo below is sliding on a thin layer of snow that's been spread across the highway.  Note the gate with the stop sign on it to prevent an auto-skier accident.  Someone in the shack to the right of the road pulls a rope and raises the stop sign when no skiers are coming to allow cars to pass.  Presumably someone shovels snow on the road from time to time to smooth it out after a few cars have passed. 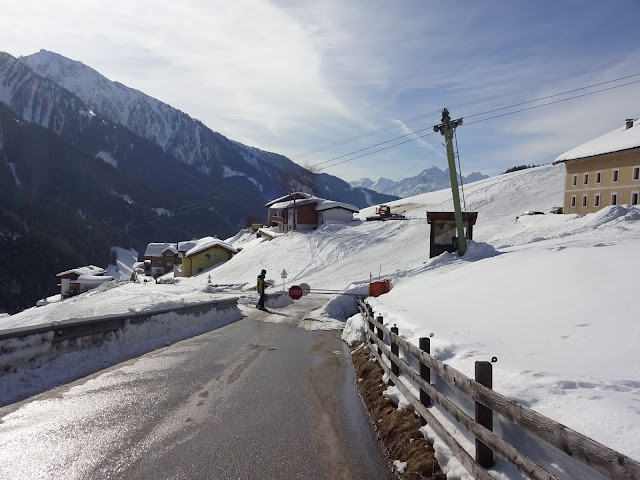