This Forecast Had Better Not Be a Turkey

In writing this post, I am assuming that you are more interested in seeing some snow for skiing than dry weather for going over the river and through the woods to Grandma's house.

We begin with a quick look back at the past so we can put the forecast into proper perspective.  You might recall that the season started out with  12 inches on the 9th and 30.5" of snow for October at Alta, which is probably fairly close to average.  Since then, things have quieted down, with only 12.5 inches of snow falling so far in November.  Variable snow conditions exist, with no snow on sun exposed slopes, even at upper elevations, and rotten, faceted snow on upper-elevation north aspects.  The photo below, from Trent Meisenheimer's most recent Utah Avalanche Center report, shows a snowpack in Martha Bowl that "was completely faceted and rotten to the ground." 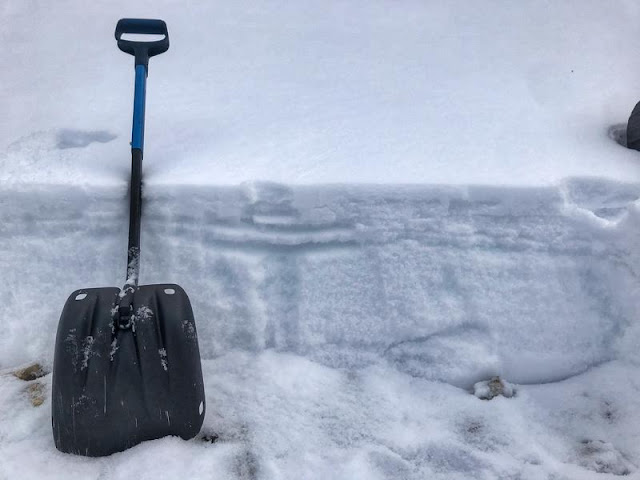 That should cause a shiver to go up the spines of backcountry skiers.  On the plus side, the cold weather has allowed the resorts to make snow and several will probably be open with limited terrain this weekend.

Through Wednesday, the forecast continues to look dry and pleasant, albeit with some smog in the valley.  Pre-thanksgiving mountain biking looks quite nice tomorrow afternoon as the ridge exits, the next storm makes landfall in California, and the pre-frontal southerly flow begins to increase.  This might allow temperatures on the benches to rise into the 50s.  There also doesn't look to be any major weather concerns statewide tomorrow.

That changes on Thanksgiving, with a trough bringing precipitation pretty much statewide.  Current forecasts show snow levels  dropping Thanksgiving morning and flirting with the benches and valley floors by afternoon.  It will be worth keeping an eye on forecasts if you are traveling.

Then, a more powerful trough approaches from the northwest.  This leads to a period of strong, moist, westerly flow Friday and Friday night, with a frontal passage currently projected for Salt Lake City late Friday night/early Saturday morning.  It's probably easiest to show this in a time-height section (see below).  Remember that time increases to the left.  This shows the deep, dry airmass presently resident over Salt Lake City persisting through tomorrow afternoon, the trough passage Thanksgiving followed by a quick break, then the moist westerlies, and the frontal passage.

How we do in the pre-frontal westerlies is a bit of a crap shoot.  Sometimes those can be productive, other times, they turn into virga storms.  Let us hope for the former.

Our downscaled NAEFS forecast for Alta shows a range through 0000 UTC 25 November (5 PM MST Saturday) of about 1.8 to 5.5 inches of water and 21 to 70 inches of snow (note that I'm not discussing the last two days through 0000 UTC 27 November, which are also included in the graphic below).

While there is a tendency to fixate on the high numbers, the reality is that they are produced by outlier ensemble members and are low probability possibilities.  It's also good to sobering up by recognizing that the lower end ensemble members are producing 1.8 inches of water and 20 inches of snow and that 0000 UTC 25 November represents a 5 day forecast.  A decent total for the period is likely, but let's see how things look in a couple of days.  For the backcountry crowd, even low amounts with wind are going to create all sorts of avalanche problems, so also keep an eye on reports from the Utah Avalanche Center.