Is Our Recent Spate of Bad Novembers "Unusual"

As far as I'm concerned, November can suck it.  I'm tired of mountain biking in the cold, wishing I was skiing.  Yeah, it's cold enough for snowmaking, but I don't live in Utah to ski fake snow.  I'd rather have some warm weather that's more enjoyable in the valley.

It's worth taking a look at historical November snowfall at Alta Guard, where the US Forest Service and now the Utah Department of Transportation have kept records back to 1945.  The average November snowfall is 69 inches, although there is great variability (note that 1972/73 is missing in the graph below). It is also apparent that the 1980s and early 1990s were exceptional for November snowfall, with the 10-year running average (thin line below) peaking at over 100 inches in the early 1990s.  November 1994 was the ultimate with 206 inches. 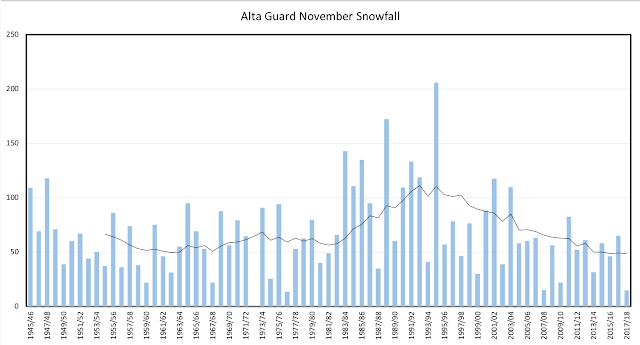 At issue is this.  Is our recent string of bad Novembers really all that unusual, or were the snowy 1980s and early 1990s the true outlier?  As far as total snowfall is concerned, recent Novembers are not all that unusual compared to the late 50s through the 1970s in terms of total snowfall.  Sadly, we don't have snowfall records going back for several hundred years to put the last 15 years or so into context.

Note that this does not mean that the climate has not changed (it has) or that the mechanisms responsible for the recent spate of bad November snowfalls aren't different than they were in the late 1950s through 1970s.  Those are issues that would require a much more in depth analysis than I can do for a quick blog post.  However, I do believe it is worth recognizing that the 1980s and early 1990s were exceptional snow years in many ways and that they may not represent the true "average" climate of Utah, even before global warming began to accelerate.
By Jim S Posted at 11/15/2018 12:47:00 PM