It's been a long time since we had a major storm cycle around here and I confess that I am really excited for the weather we will see this holiday weekend.

The Thanksgiving trough passage is really just an appetizer.  The mashed potatoes and gravy, stuffing, and 25-pound butterball follow on Friday when a strong upper-level trough approaches the Pacific Northwest coast and moisture and precipitation spread inland into Utah. 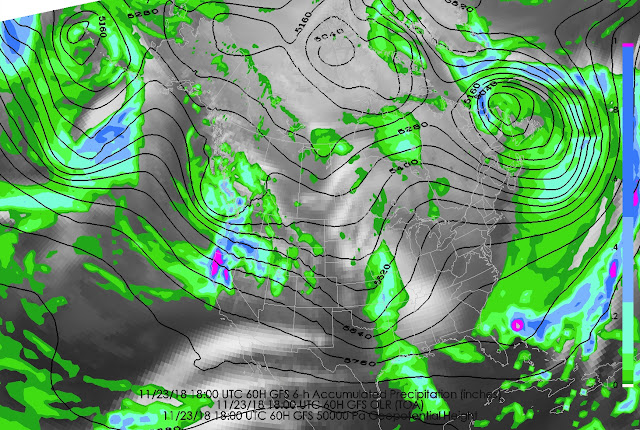 It's been a long time since we've seen a time-height section like the one below.  DEEP moisture for an extended period of time.  There is the Thanksgiving storm, then a bit of a break, followed by strong, moist, westerly crest-level flow for about an extended period before a frontal passage early Saturday morning.

For the period ending 11 AM MST Saturday, the 12-km NAM is putting out just over 3 inches of water for upper Little Cottonwood.

Through Saturday afternoon (5 PM) the SREF ensemble mean for Alta Collins is around 3 inches, although the range is quite large (.9 to 4.8 inches).

I lack the time to talk about some of the nuances of the forecast, such as how shadowing in the lee of the Oquirrhs sometimes reduces precipitation rates in Little Cottonwood during westerly flow, while the northern Wasatch does well.  Further, such details might best be left until we can see of the whites of the storms eyes, and we're not quite there yet.  I'll just say that this appears to be a major storm cycle, with total accumulations of 1.5 to 3 inches of water and 18 to 36 inches of snow from Thursday through Saturday in the mid and upper elevations of the central and northern Wasatch.  I don't see us getting skunked in this one.  Snow levels will probably peak Friday afternoon or early Friday night in the warm pre-frontal flow.  Briefly they could get up to around 7000 feet, but could stay lower as this is an instance where one tends to see a deep layer that is near the melting point and precipitation intensity often controls the snow level.

Details concerning snow levels, the timing of precipitation, and the intensity of precipitation are not possible to predict with precision at such long lead times.  If you are traveling over the holiday weekend, monitor forecasts at https://www.weather.gov/slc/ as this is a blog post, not a forecast, and I can't do anything but hit the highlights.