I write this around 8:15 AM Sunday morning.  I've been up for a while already as I was awoken by the remarkable frontal passage early this morning.  The meteogram from the Salt Lake City International Airport shows as clear a frontal passages as you'll ever see between 445 and 450 MST (1145 and 1150 UTC) with an abrupt shift in the wind from southerly to north-northwesterly and temperature falls of about 5F in 7 minutes and 8F in 9 minutes.

The front was accompanied by a narrow band of strong radar reflectivity, evident in the yellow color fill below. 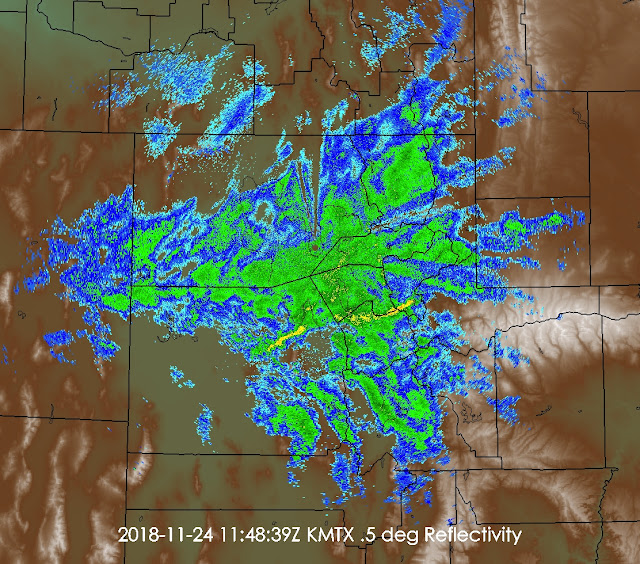 Twitter user @UtahWxMan took this great photo of the shelf cloud accompanying the front as it moved through Bountiful.

For the most part, the past three days have produced as expected.  Through 8 AM, the Snowbasin Middle Bowl site (7400 ft) has recorded a total since Thanksgiving of nearly 2.6 inches of water.

Alta-Collins sits at just under 1.8 inches, which translates to 22 inches based on my adds of the increments on the interval stake.

The forecast for today is a bit tricky, which reflects the usual post-frontal crap shoot.  It appears the frontal precipitation may linger for a couple of more hours in the Cottonwoods.  Then we'll have to see on the instability snowshowers.  For many days, the models called for a quick shutdown, but they've been a bit more bullish recently.  The HRRR, for example, is generating post-frontal bands that I would describe as somewhat unrealistic in their intensity and spacing, but perhaps indicative that we will have some shallow instability to play with this afternoon.

So, perhaps another 2-5 inches at Alta Collins from 8 to 11 AM and then we'll see what the post-frontal crapshoot can produce.

Two aspects of the storm cycle that we're not as well forecast were the break yesterday, which produced a nicer day than expected, and the persistence of the overnight warmth, which led to temperatures as high as 33.5˚F at the base of Alta at 4 AM this morning.  Temperatures also reached 33.7˚F at the Snowbasin Middle Bowl site (7400 ft).  While I wasn't surprised to see warm temperatures ahead of the front, I thought we would have seen peak temperatures earlier during the storm, perhaps Friday afternoon or early Friday night.  This reflects a stronger trough, which led to flow with a more southerly component in the pre-frontal environment, and may have limited overnight snowfall in the mid elevations.

By and large, however, this is a game changer, although sympathies to the Park City side of the mountain where accumulations have lagged (although that's not unusual).   Although there will be a break Sunday and Monday, forecasts show an active pattern later next week.  We'll have to see how it comes together.
By Jim S Posted at 11/24/2018 08:25:00 AM