The Climate Prediction Center issued its monthly ENSO diagnostic discussion today and not surprisingly continues to go for a 95% chance of El Nino continuing through winter.  As we've seen for some time, sea surface temperature anomalies show a well-developed El Nino signature with a tongue of anomalously warm water extending across the eastern and tropical Pacific.

The International Research Institute for Climate and Society at Columbia University has a nice simple graphic summarizing the El Nino predictions showing a very high likelihood of El Nino conditions persisting through winter before the likelihood of a decline in strength increases in the spring.

As we've discussed previously, I don't consider the existence of El Nino to have a strong influence on the snowfall odds for this coming ski season in the central Wasatch (see Wasatch Weather Weenies Survival Guide for El Nino).  However, since I'm desperate for material, I thought I'd show another perspective today, albeit one based on a very small sample size.

In the graph below, I've taken the Nov-Apr snowfall at Alta Guard and have ordered it from high to low, identifying the top 1/3 of years in blue, middle 1/3 in green, and bottom 1/3 in yellow. 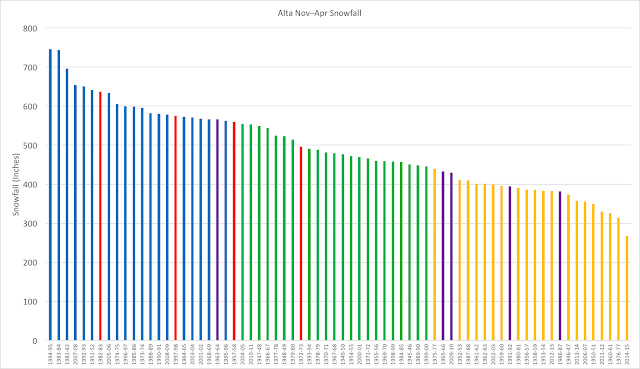 One view of this is that a strong El Nino might be associated with a good snow year.  The other view is that the sample size here is small and that adding more cases yields a distribution that shows little correlation (note that we only have Alta snow data since WWII, so to add even more cases requires using wimpy El Ninos).  CPC has added a few more cases in the plot below by looking at strong El Ninos back to 1915 and the precipitation produced in climate zones.  Their definition of strong is a bit lower than mine and includes a couple of the moderate events that I used above.  In any event, it shows northern Utah to be sitting on the transition zone or having a slight tendency for drier winters.

So, we have a small sample and imperfect data, but my read continues to be that the dice simply are not loaded very strongly for this coming winter.  However, if it will make you happy, you can cherry pick the Alta bar graph above and assume a big winter is ensured.
By Jim S Posted at 10/08/2015 01:03:00 PM