Eastern Utah Is So Weird!

As noted by David, who commented on the previous post, the valleys and lowlands of eastern Utah are just plain weird climatologically.

If one classifies the precipitation climate over the southwest U.S., there are four major regimes.  The first (row a in the image below), covering most of California, northern Nevada, and the upper elevations of northern Utah and western Colorado, features a pronounced winter maximum.  The second (row b), covering much of Arizona and portions of southern Utah, New Mexico, and southwest Colorado, features a pronounced maximum during the monsoon.  The third (row c), covering the plains of eastern Colorado and New Mexico, is somewhat related and has a maximum in the summer with less precipitation in the winter.  Finally, there is a fourth regime (row d) in the lower elevations of portions of Nevada, Utah, and western Colorado where precipitation peaks in the spring.  This includes the Salt Lake Valley.

If you look carefully at those plots, however, you can find a region that is not included and that is the valleys and lowlands of eastern Utah, including places like Vernal and Moab.  The climate there has a maximum occurring in October. 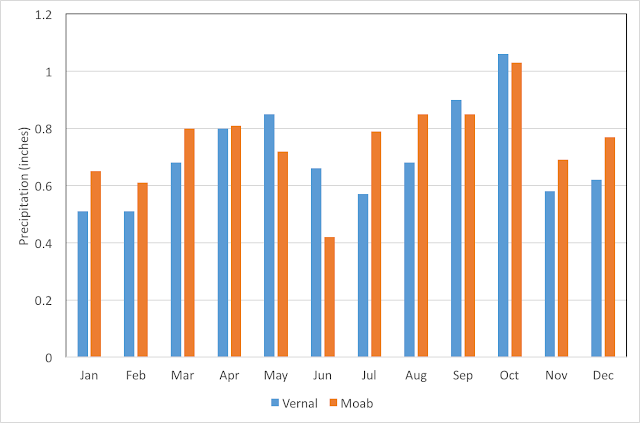 Why October?  I can speculate, but it really deserves some investigation.  As suggested by David, there could be a magic point as the monsoon tails off and we begin to see mid-latitude storm systems coming in that enables more moisture and precipitation to move into this area.  It might also be that this area got pounded by a small number of larger storms during the past few decades, skewing the stats for October (I haven't checked to evaluate the statistical significance of the October maximum).