A Splitting Storm, But Early Next Week Things Get Interesting

The system moving through the western United States today is a very good example of a splitter.  It was a coherent, full-latitude trough over the eastern Pacific, but stretched and split into two distinct short-wave troughs over the western U.S., one that is moving across the far southwest, the other tracking through the Pacific Northwest and Canada.

Although many people feel gypped by splitting storms, the western United States lies climatologically in the exit region of the Pacific jet stream and in an area favoring the stretching and splitting of upper-level systems.  In other words, there's nothing unusual about this happening.

As I was heading home on my after-work bike ride yesterday, I noticed it was getting awfully dark. The end of October is here, we switch to standard time on Saturday night, and November arrives on Sunday.  We've had a good run of fall weather, arguably the best in the instrumented record other than October 2004 when it snowed enough to open the backcountry and resorts by Halloween, but it's time to think about snow once again.  In addition, it also appears that Howie has reset the automated snow-depth sensor at Alta-Collins, which had been reading an "extremely optimistic" 4 inches all summer.  It was reset to zero yesterday, so we're ready for a clean start.

By now you have heard rumors of a storm in the future, and indeed, the GFS is bringing a healthy and cold upper-level trough across the western United States early next week.  This is the time of year when any possibility of snow gets a mention on the news, but the real question is, what are the probabilities?  Statements like "we may get a major storm next week" are flippantly thrown around without any mention of the probability of that happening.  Let's try and put some numbers on it.

If we take a look at a suite of forecasts for the next 7 days from the North American Ensemble Forecast System (NAEFS), which are lower resolution but downscaled using climatological data, we see a fairly optimistic forecast for Alta–Collins.  Although one of the ensemble members gives us nothing, most are generating from 1.5 to nearly 4 inches of water equivalent through Wednesday afternoon (0000 UTC 5 November).  This particular downscaling technique has a bit of a high bias, so perhaps think in the 1–3.5 inch range. 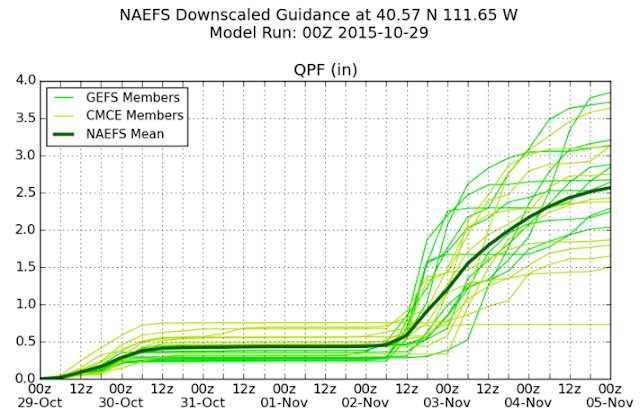 Most members of the European ensemble are also troughy and wet, although there are a few that are not as wet.

So, if I do a quick qualitative integration of these ensemble forecasts (both the NAEFS and the European) with a bit of a bias correction, I give us something less than a 10% chance of a total skunking at Alta-Collins, with an 80% chance of an inch or more of water equivalent, 40% chance of 2 inches or more, and 10% chance of three inches or more through Wednesday afternoon.   Thus, I think this is a storm worth watching, although sometimes Mother Nature decides to give us something that lies outside the ensemble envelope.  That would be good if she went big, and not so good if she decided to have the storm "go south" (literally and figuratively).
By Jim S Posted at 10/29/2015 08:57:00 AM