We are mired under a persistent upper-level ridge that is bringing record setting heat to a big portion of the west.  Yesterday's high of 102˚F at KSLC is the highest ever recorded in September.  Records are falling elsewhere as well.

High 90s and low 100s look to predominate through at least next Wednesday.  The overnight forecast for early next week from the GFS in particular caught my attention.  There's still a monster ridge over the west and 700-mb temperatures at 0000 UTC 7 September (6 PM MDT Tuesday) near 20˚C over much of Utah. 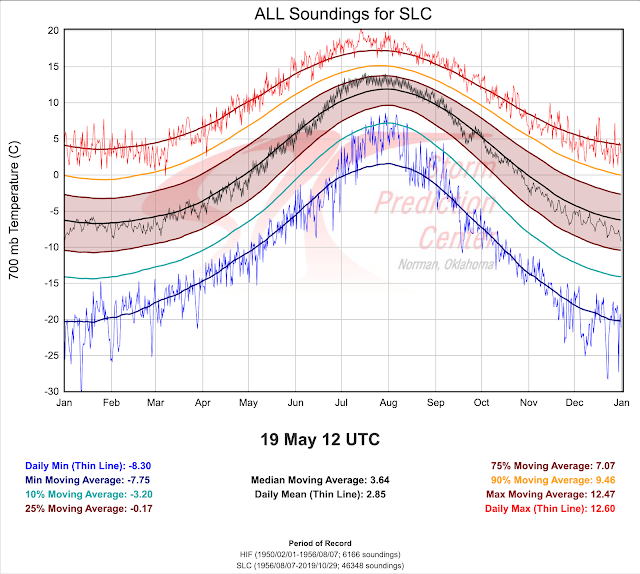 Yesterday afternoon's sounding observed a 700-mb temperature of 16.8˚C, so this was close to the highest on record in September.  However, I took a look at the raw numbers and the GFS is currently forecasting 19.3˚C at KSLC for late Tuesday afternoon around the time that the upper-air sounding is launched and the time of maximum temperature.  Such a temperature would be a whopping 2˚C above anything previously observed in September.  It's just one forecast model, but ensemble derived temperature forecasts for KSLC (not shown) further support the view that we are locked in for an unprecedented run of September warmth, adding insult to injury after a long, hot summer.
By Jim S Posted at 9/02/2022 08:19:00 AM