Pretty exciting stuff happening right now over the north Pacific and Bering Sea where a powerful cyclone is disrupting the jet-stream level flow with implications for the weather of the western continental United States.

Understanding the event requires going back in time to 0000 UTC 14 September (6 PM MDT Wednesday 13 December).  At this time, tropical storm Merbok was moving poleward (identified below with an L) and about to interact with a trough in the mid-latitude westerlies (red dashed line). These two features got together and decided to "go off."  With an assist from the upper-level trough, Merbok underwent what is known as extratropical transition, evolving from a tropical storm into a extratropical cyclone of the type found in the mid and high latitudes.  It also deepened explosively to remarkably low pressures.  At 0600 UTC 16 Sep (Midnight MDT last night), the cyclone was centered in the western Aleutians (L in the figure below) with a central pressure of 948 mb (average sea level presure is 1013 mb).  Storms like this tend to disrupt the jet-stream level flow by building a downstream ridge that can initiate a process known as downstream development in which downstream features also amplify. Indeed, the cyclone built a strong ridge over the Bering Sea and strengthened the northerly jet downstream over Alaska. Subsequently, forecasts indicate that the ridge will broaden and move slowly downstream while the northerly jet "carves out" a deep upper level trough off the coast of California. 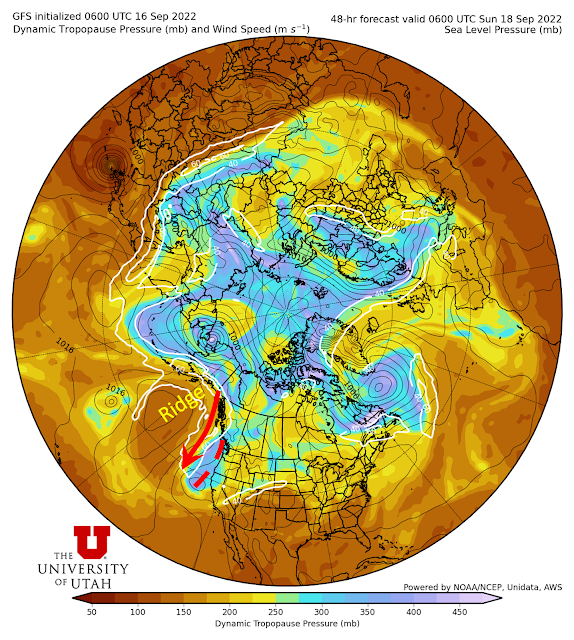 Another perspective is provided by the loop below.

Indeed, the trough developing off the coast of California will be an important weather-maker for the Golden State this weekend and early next week as it "digs" off the west coast and the associated low level frontal system moves slowly onshore.  Below is the GFS forecast for 1500 UTC (0900 MDT) Monday showing frontal precipitation over central and northern California. 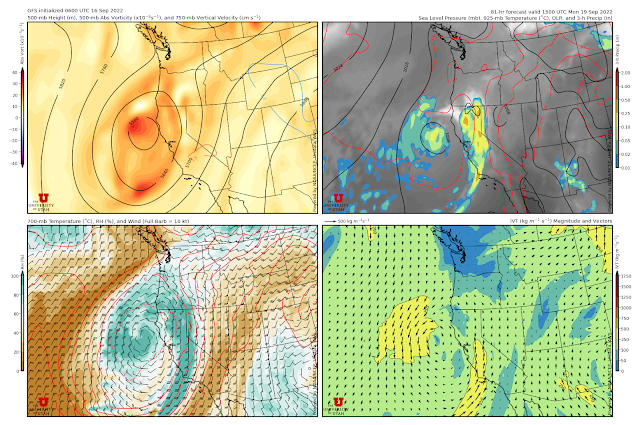 I've been watching this situation closely as my son is backpacking the southern John Muir Trail during this period.  It's hard to say if he might be dealing with significant snow prior to his planned exit on Tuesday.  The frontal precipitation either never makes it to the far southern Sierra or produces only a an inch or two of snow in many ensemble members, but there are a few that produce several inches of snow.  Below is the NAEFS plume for Mammoth Mountain (8885 ft) showing about 1/3 of the members producing 2-6 inches and the other 2/3 2" or less.  He'll be south of Mammoth, so I'm hoping he's dealing with scant snowfall amounts. 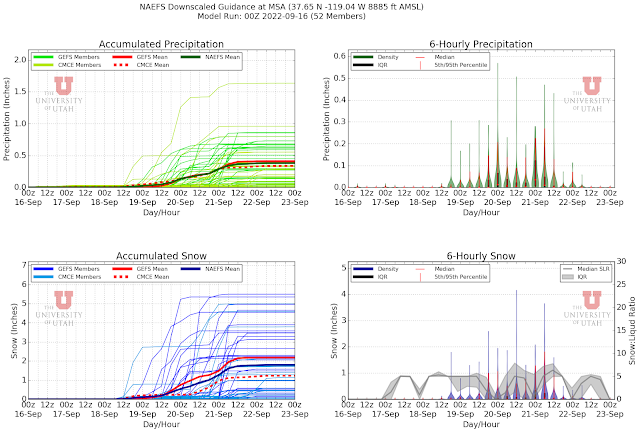