I suspect most people feel the storm cycle has underperformed thusfar, so let's take a look back.  Below is the GFS-derived forecast from our blog post on 22 December.  I've added a red dot on the accumulated precipitation and snowfall traces.  The GFS was going for 3.17 inches of water, about 15% greater than observed.  That's actually not too bad for a single model. If we look at the downscaled NAEFS, we're on the low-end, but within the range of forecast water equivalent. 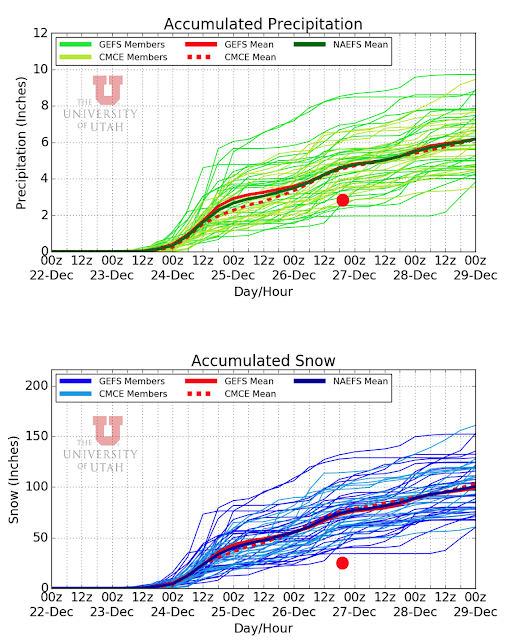 My view is that the total water equivalent forecast by the GFS and the NAEFS wasn't too bad.  However, there were two important shortcomings.  The first is that the GFS and most NAEFS members called for the storm on Thursday and Friday to be much larger than observed.  The GFS, for example, produced 2.5 inches of water compared to about an inch observed.  In contrast, today's storm was to be smaller.  Two wrongs have helped to make a right and the weaker first storm was disappointing.
Second, the snow-to-liquid ratios were overdone, which exacerbated the water equivalent overforecast even more.  As a result, the GFS snowfall forecast was 39", 56% greater than observed and all members of the NAEFS forecast too much snow compared to observed.
Thus, it is OK to be disappointed, but not too disappointed.  The parade of storms continues and we have another cold front moving through the central Wasatch late tomorrow (Monday) afternoon and evening.  The GFS forecast below puts the front right over the central Wasatch at 0000 UTC 28 December (5 PM MST Monday).

After a break tonight, the models generate about 0.5 to 0.75" of water and 9-15 inches of snow through 11 PM Monday night, with snowfall heaviest around the time of frontal passage late tomorrow and early tomorrow evening.  I like a total for that period of 8-16" at Alta-Collins.  In the wake of the front, temperatures will likely be the coldest of the season so far.  Temperatures dipped to -5˚F at the top of Mt. Baldy in mid December, but the latest forecast is pushing it down to -10˚F Tuesday morning. 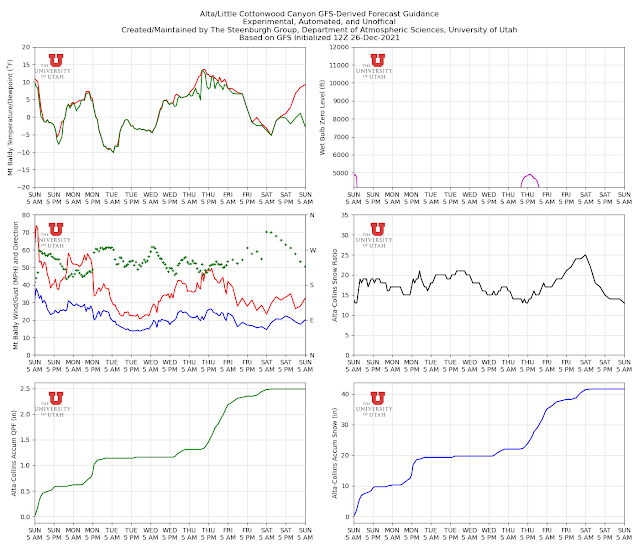