Saturday night and Sunday, wildfires threatened homes near Lehi, Draper, and Saratoga Springs as two separate fires raged in the urban-wildland interface.  The Traverse Fire near Lehi and Draper was apparently caused by fireworks.  The cause of the Knolls Fire near Saratoga Springs remains undetermined.

The cooler weather today is a blessing, but conditions Saturday night and Sunday must have been difficult with strong winds from varying directions.

Observations from the flight park near Point of the Mountain show south-southeast winds Saturday morning through about 1300 MDT, then a shift to S-SSW, and finally a shift to north at about 1800 MDT.  Winds from about 1300-1800 MDT were sustained at 35 mph with gusts to nearly 50 and then after the frontal passage peaked with gusts over 60 mph.

The remarkable late-June airmass change is quite evident in the temperature trace which shows an afternoon maximum yesterday of 88˚F, a rapid drop in temperature of over 15˚F with the frontal passage, and then a continued decline to current temperatures just above 40˚F.  Thankfully, the lower temperatures, higher humidity, and lighter winds this morning should greatly assist firefighters.

We will thankfully be under the grips of this late-June trough through Tuesday.  It will be unseasonably cool today with valley highs in the 60s, which is more like late April.  The Alta Devils Castle webcam is even showing a trace of snow above about 10,000 feet. 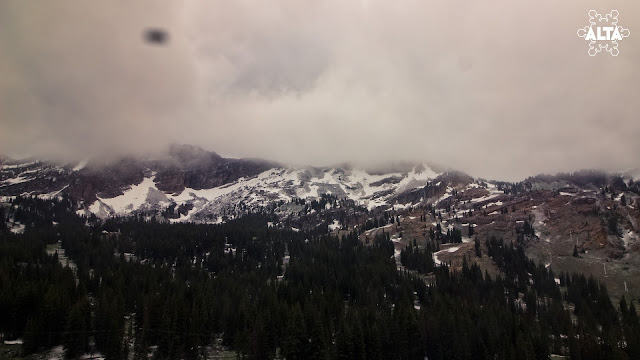 Tip of the hat this morning to all health-care workers, first responders, and anyone helping with relief efforts for all that you do.
By Jim S Posted at 6/29/2020 07:50:00 AM