An incredible tweet below from @terrybnd with a time lapse of a mountain wave and downstream hydraulic jump.  I don't know precisely where it was taken, but they commented that they were enjoying "lovely scenes of radiation fog enveloping the fells on and around Ullswater" which is in the Lake District of England.

The video shows a classic high-amplitude mountain wave with plunging flow producing a "waterfall cloud" on the lee side of the ridge with a hydraulic jump and rotor developing immediately downstream.  The cloud structure on this occasion is ideal for tracing the flow.  A schematic of the flow in these situations is depicted below, although you have to mentally flip it and reduce the scale a bit to match that in the time lapse.
The flow during downslope wind events along the northern Wasatch, which tend to be strongest near Centerville and Farmington, is similar.  However, because the Wasatch are much taller than the hills of the Lake District, one typically does not see cloud plunging down the entire lee (west) slope.  Instead, one sees just a cap cloud on the ridge, as in the photo below from a modest downslope wind event in February (and my last trip through the Salt Lake airport just prior to COVID). 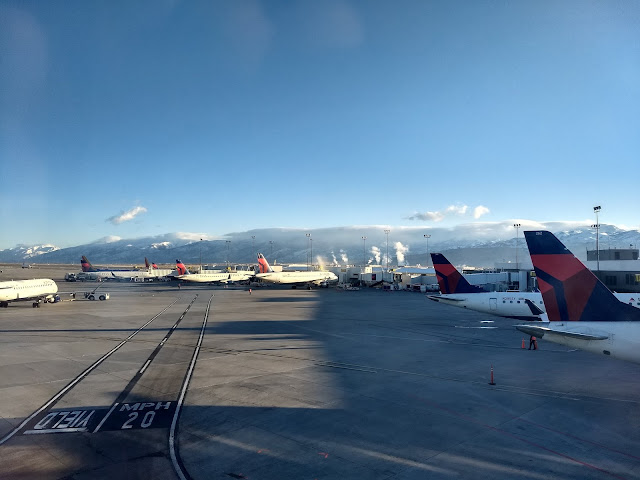 In the downslope flow, the air sinks and warms, leading to a decrease in relative humidity and cloud evaporation.  However, evaporation takes time.  In the time-lapse above, the amount of warming, resulting decrease in relative humidity, and time needed to evaporate cloud droplets are not large or long enough to create a large cloud-free region (although there is some clearing).  Thus, the clouds provide a pretty good tracer for the low-level flow.

What you can't see is the wave-breaking region aloft, as depicted in the schematic.  While rotors and other features associated with downslope flow are hazards for aviation, the wave breaking region, which is often cloud free, is another as it is often accompanied by turbulence, which can be severe.