A weak trough will move over northern Utah tomorrow, lowering maximum temperatures in the Salt Lake Valley into the mid 80s and bringing a chance of scattered showers and thunderstorms.

I mentioned how great it is that we keep seeing these troughs in my previous post, and there's a chance of another, stronger one, early next week, but the impacts on northern Utah vary substantially depending on the forecast model.

The GFS forecast valid 1200 UTC (0600 MDT) Monday shows a deep trough over the northwest U.S. with a cold front moving through northern Utah.

The GFS then brings the trough directly through the northern half of the state and by 1200 UTC (0600 MDT) Tuesday, forecast 700-mb temperatures are just below 0˚C, cold enough for snow in the upper elevations above probably 9000 feet, although possibly lower.

However, the ECMWF has a much different evolution for northern Utah.  It stalls the trough over the Pacific states. 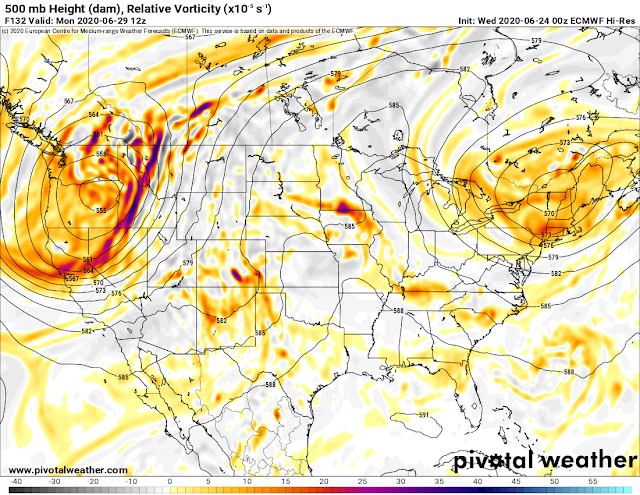 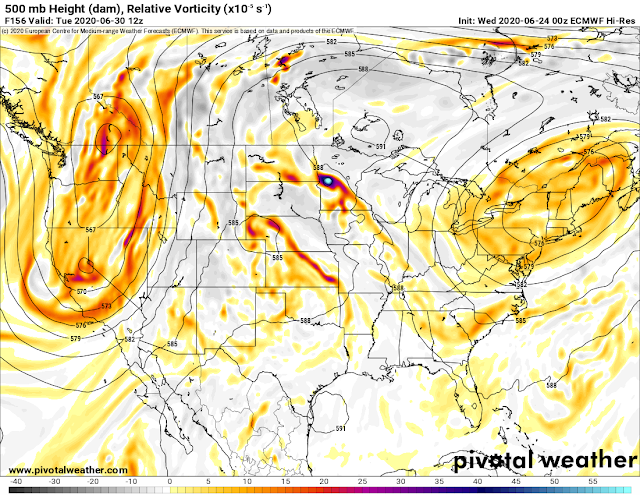 We would probably see a cold frontal passage at low levels in that solution, but it's a tough call.  Additionally, it would be drier and snow levels would not be as low.

Thumbnail 500-mb plots from the GEFS all show a trough over the western US, but with varying amplitudes and speeds.

This means there's a great deal of uncertainty about how things will play out early next week.  In fact the ECMWF drags the trough very slowly across the western U.S. which would be a fly in the ointment for weather for much of the week as the 4th approaches.

The bottom line is that you should monitor forecasts in the coming days to see how this plays out.  Ahead of the trough we could see elevated fire-weather risk with wind and low humidities.  Near the trough, a chance of showers and thunderstorms.  Much will depend on track, intensity, and movement and the range of possible outcomes for any given location in northern Utah is quite large.
By Jim S Posted at 6/24/2020 09:52:00 AM