July is climatologically the hottest month of the year in Salt Lake City, but so far, the first three days of July have been relatively pleasant.  One might even say that July has entered like a lamb.

It's worth a look at July from a historical perspective.  July is not only the hottest month in Salt Lake, but it also features relatively little variability from year to year.  The range in average temperature from July to July is around 5˚F, with a few exceptions (e.g, 1993).

So, on this 4th of July, we should thank our lucky stars that the first three days of July were relatively pleasant.  On the 1st, the minimum and maximum temperatures were 53˚F and 88˚F, both below average (average here based on 1981-2010).  On the second, they were 59˚F and 90˚F, below and at average, respectively.  And then on the 3rd, we reached 68˚F and 95˚F, which are above average, but I've learned not to complain about 95 in July.

By and large, the forecast for 4th of July weekend looks great, with the only blemish being a possible isolated shower or thunderstorm, mainly in the mountains of central and eastern Utah, as noted by the National Weather Service graphic below. 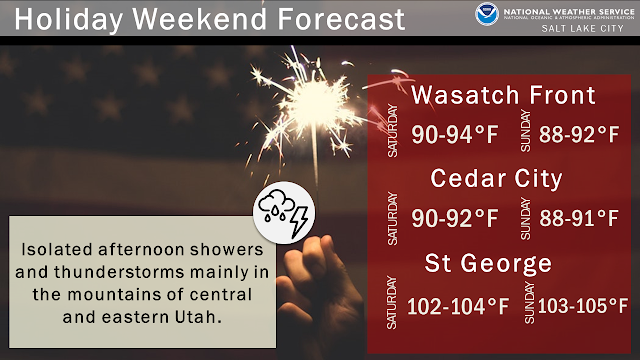 Additionally, the extended forecast ain't awful, with highs in the low-to-mid 90s through next Friday. 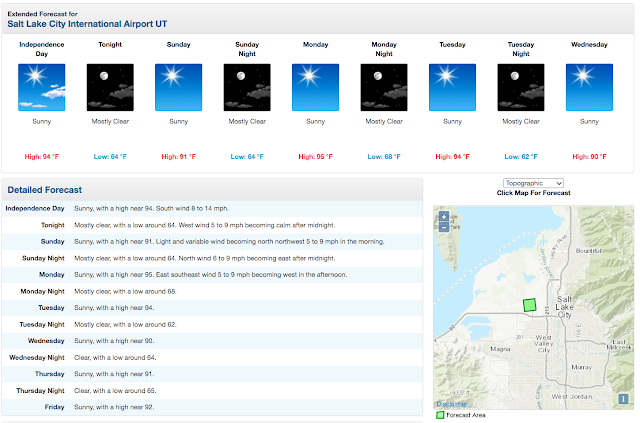