Evidence of Snow in July

Astute observers can find evidence of falling snow in July over northern Utah, even in this heat, but you need to know where to look.

I took the photo below on Monday morning when altocumulus clouds were rolling across northern Utah.  In the center is one of these altocumulus clouds, which features a ragged cloud base with streaks extending diagonally toward the Earths' surface.  The poorly defined cloud base and streaks are produced by falling snow crystals (or snow flakes) that have grown in the cloud.  Due to the dry airmass at low levels, these snowflakes do not reach the Earth's surface, but instead sublimate or melt and evaporate before reaching the ground. 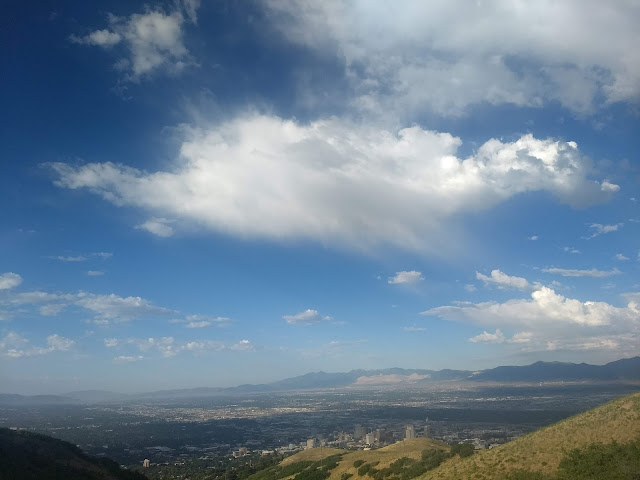 Below is another photo I took of this process that morning.  In the upper right-hand corner there's what we refer to as a mixed-phase cloud, which means the cloud consists of both liquid water and ice particles.  The liquid water particles are supercooled, meaning that they are colder than 0˚C, but still remain in a liquid state. 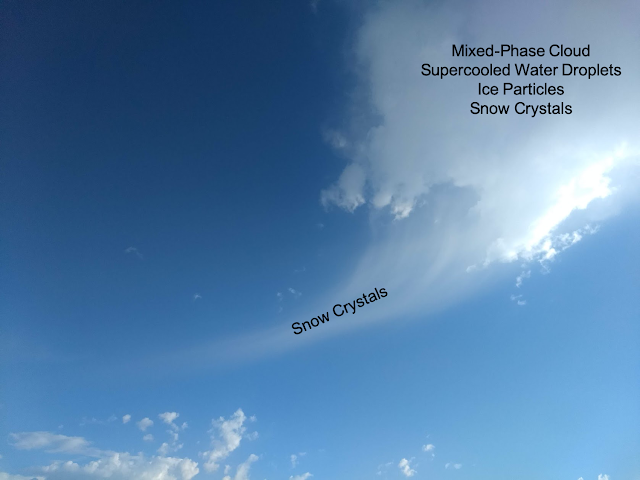 In such a cloud, the ice particles grow faster than the water droplets, and they ultimately become large enough to fall out as snow crystals or snow flakes.  One can see these snow crystals trailing below and behind the cloud in the photo above.  This trailing tail of snow crystals is sometimes called a Mare's Tail.

Take some solace in the fact that it was indeed snowing this week aloft, even if it wasn't reaching the ground.  This is particularly important today (Friday) when the forecast high at the Salt Lake City airport is 100˚F.

It's been a challenging time for blogging as my workload this summer has been unusually high and my mind has been occupied by many things besides the atmosphere.  This has curtailed my time and creativity, which has reduced post frequency.  It's likely that I will continue to limp along, with potentially some longer breaks.  Apologies, but you do get what you pay for with this blog :-).
By Jim S Posted at 7/17/2020 08:54:00 AM