Over the past few days I've travelled to and from Tempe, Arizona where we dropped my daughter off for her freshman year at Arizona State.

It was a pretty exciting period meteorologically.  The first night, we experienced 60+ mph outflow winds from thunderstorms approaching Phoenix from the Mogollon Rim to the northeast, which then provided a great lightning show.  The next night, incredibly, I slept through 3+ inches of rain that fell in Tempe in a huge deluge.

My daughter texted me late yesterday saying they had just had a haboob, that the power was out, and she was holed up somewhere on campus until the storm passed.  A haboob is a dust storm that is frequently initiated by the outflow from thunderstorms and typically found in desert regions of the world.

For yesterday's haboob in Phoenix, a quick look around YouTube unearthed the video below that is available here and I hope is accurate for the date and time.  Note in particular the deep convection on the right of the frame, with the outflow and concomitant dust running well away from the storm.

Imagery from the KIWA radar operated by the National Weather Service shows the evolution very well.  The leading edge of the outflow and haboob, known as a gust front, is indicated by an arc shaped "fine line" that moves southwestward across the Phoenix Airport (red square) well in advance of the thunderstorm that produced it.

Passage of the gust front is easy to spot in the meteogram from the Phoenix airport.  Note the abrupt 20˚F drop in temperature and increase in sustained winds to 45+ mph with gusts to 58 mph. 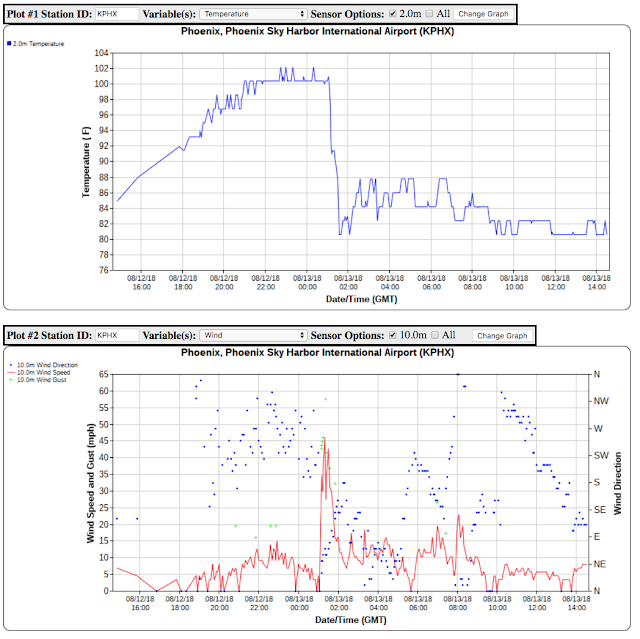 The fine line enables meteorologists to track features like this and provide very good short-range forecasts of hazardous wether in conditions like this.  The fine line is produced by radar returns not from precipitation, but instead from what meteorologists refer to as "nonmeteorological" scatterers or targets, such as bugs, dust, sand, and the like.

Modern radars collect statistics on radar pulses that allow meteorologists to identify non-meteorological scatterers.  Non-meteorological scatterers tend to produce complex radar scattering signals that show lower correlations from radar pulse to radar pulse compared to precipitation.  As a result, a product known as correlation coefficient is produced by National Weather Service radars that can be used to discriminate between non-meteorological scatters and precipitation.  Below is the correlation coefficient analysis for the radar scan collected right after the passage of the fine-line past the Phoenix Area.  Values accompanying the thunderstorm are near 1 (red), whereas those accompanying the fine line are lower (.8 to .9, light blue, green, and yellow). 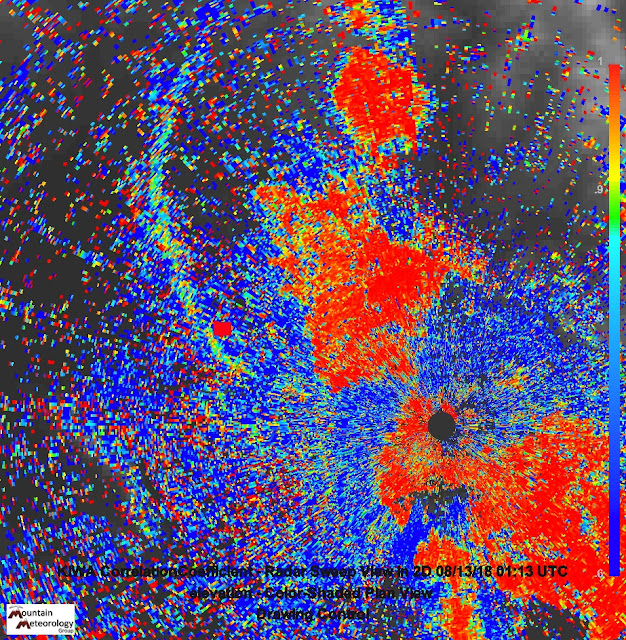 Haboobs provide an excellent example of how thunderstorm impacts can occur at a great distance from the storms themselves.  Thanks to modern technology, I found warnings from the National Weather Service, which appeared in a timely manner on my phone, were extremely helpful while we were traveling across Arizona.
By Jim S Posted at 8/13/2018 08:58:00 AM