Strong and severe thunderstorms made for an exciting day and evening yesterday.

I was most impressed with the reports (and photos) of hail in Farmington, Kaysville, Layton.  Photos on twitter were impressive.

Hail of that size can be damaging, and left some dents in cars in the area.


Aftermath of hailstorm on freeway in Davis Co., my car is riddled in dent marks. How does this even get fixed!? #utwx #weather pic.twitter.com/1BkaJJkllv
— Jen Hicks (@Jebbowie) August 22, 2018

Severe hail with a diameter of 0.75 inches or greater is relatively rare in our part of the U.S. and most common in the high plains.

Nationwide on an annual basis, hail does more than $1 billion in damages to crops and property, including cars.  In Colorado, damages amount to about $3 billion/decade.

The cell that may have produced the largest hail is plotted below and is located just to the south of Hill Field (HIF).  Note that radar reflectivities for that cell are higher than seen for many other cells and include a number of pixels higher than 60 dBZ. 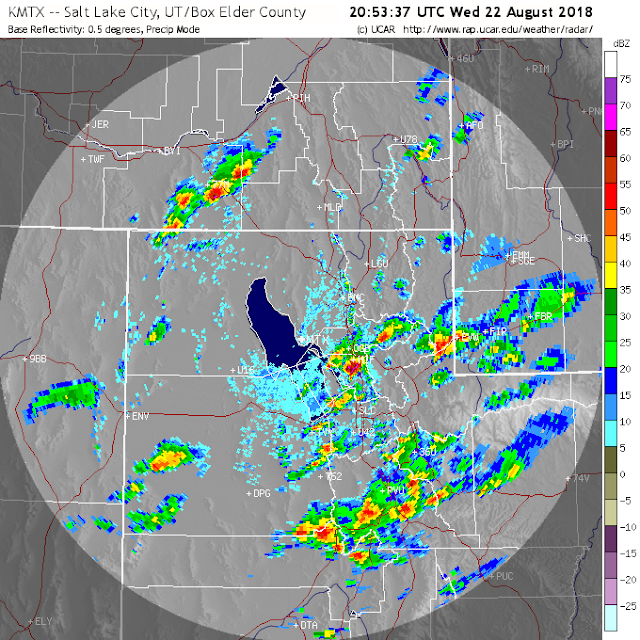 The latest (1415 UTC) Goes-15 IR imagery shows the center of Hurricane Lane to the SSE of the Island of Hawaii.

The 2 AM HST public advisory from the Central Pacific Hurricane Center reported that Lane remained a major hurricane at category 4 with 130 mph maximum sustained winds.  There is a tendency to focus on winds and hurricane categories, but the reality is that it is water, through storm surge and flooding, that is responsible for most deaths associated with hurricanes and tropical storms.  Although Lane is expected to weaken as it it moves northward, wind, rainfall, surf, and storm surge threats remain high for the Hawaiian Islands.