Some impressive rainfall totals have been produced by Lane on the Big Island of Hawaii over the past 2-3 days and it's worth doing a quick comparison and contrast with the climatological rainfall as this is relevant for understanding flooding.

Owing to the quasi-persistent northeasterly trade winds, the eastern slopes of the Big Island, especially those to the west and northwest of Hilo, are very wet, with a maximum of over 8000 mm (300 inches).
Note, however, that that maximum is not on the high-altitude slopes of Mauna Kea and Mauna Loa, but instead on the lower slopes.  In fact, the maximum lies at altitudes between 2000 and 4000 feet above sea level.  This is a bit surprising for those of us in the western U.S. who typically expect precipitation to increase with elevation, but it is a consequence of several factors including the persistent trade-wind inversion, which frequently limits the vertical extent of precipitation-producing clouds, and also the microphysical processes that generate rain in the region.

One can almost infer this rainfall maximum and the general distribution of precipitation from Google Earth imagery of the Big Island.  Note in particular the green, densely vegetated areas on the eastern slopes of Mauna Kea and Mauna Loa, at moderate elevations on the southeast and western slopes of Mauna Loa, and along the northeast shore.  These correspond vary well to areas with more than 750 mm (30 inches) of rain in the analysis above. 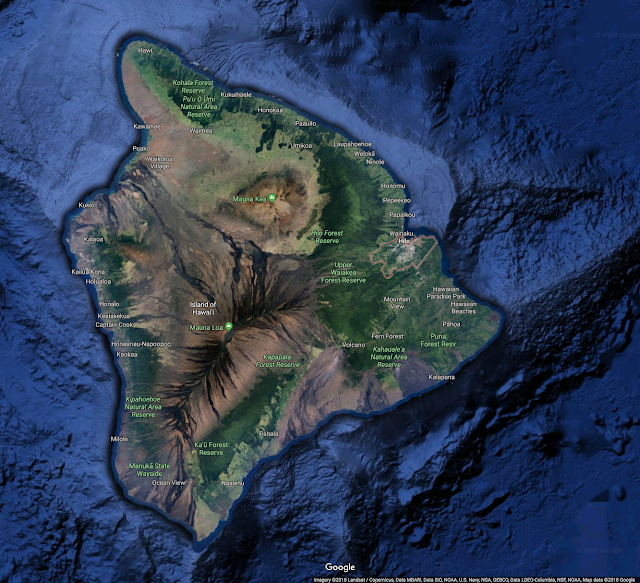 Now let's take a look at some precipitation totals for the 2-day period ending at 1900 UTC (9 AM HST) Friday 24 August.  For simplicity, I will focus on two locations, the Hilo International Airport at 36 ft above sea level and the Hakalau Remote Automated Weather Station at 6549 ft on the eastern slope of Mauna Kea.  During the past two days, Hilo has received 20.04 inches of rain, and Hakalau 33.34", as indicated below. 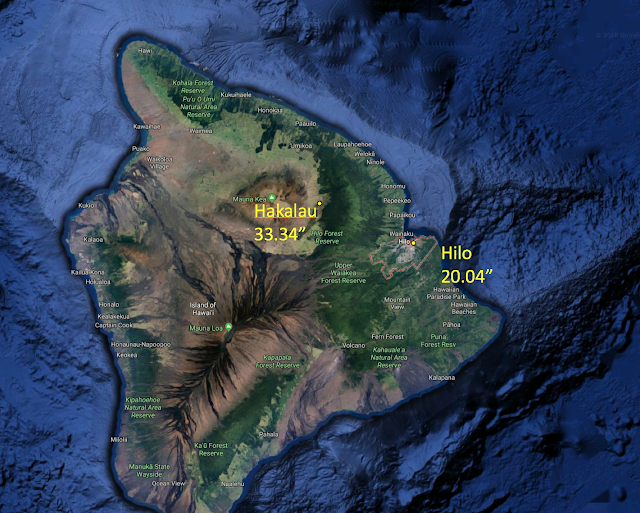 How unusual is such a 2-day total?  We can estimate that at the National Weather Services' Precipitation Frequency Data Server.  At Hilo, 20 inches of rain in 2 days has a recurrance interval of about 20-25 years or, perhaps better put, has a likelihood of happening in any given year of 1 in 20 or 25.  Unusual, but not hugely so.

Hakalau, however, is a different story.  Because of it's relatively high elevation, it actually sits a bit above the heavy rainfall area of the Big Island and 33 inches of rain in 2 days at that elevation is a much rarer beast.  That amount of rain at that location has a recurrence interval of more than 200 years or, perhaps better put, has the likelihood of happening in any given year of less than 1 in 200.

Intensity, duration, and coverage all matter for runoff.  Lane is a big rainfall producer, but it is not only producing big numbers, but it is doing it at elevations and in the upper reaches of drainage basins that don't typically see such big numbers.  I hypothesize that this may be exacerbating the intense runoff and flooding on some parts of the Big Island.
By Jim S Posted at 8/24/2018 01:58:00 PM