Ask and You Shall Receive

I know I should be talking about the changes underway in Utah's weather, but I'm still suffering from a case of Irma-itis, amongst other maladies.   So, instead, I want to address some questions being asked by our readers about Irma's track shift. 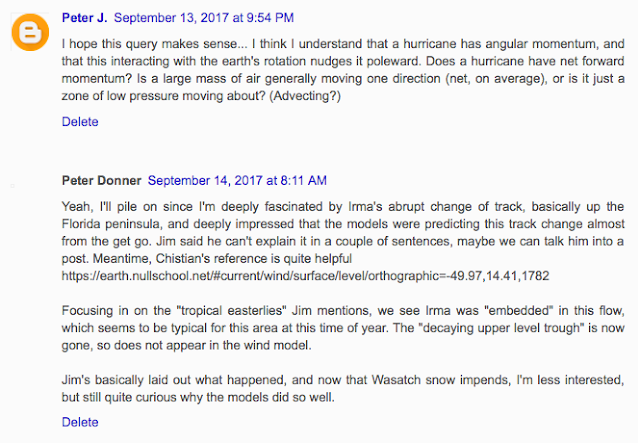 I am neither a theoretician, nor a hurricane expert, so let me just come out and say it.  I don't understand hurricane dynamics well enough to answer these questions in what I consider a satisfying way.

On the other hand, sometimes it's not worth thinking too much about these things.

The ability to for numerical weather prediction systems (hereafter computer models) to predict the shift in Irma's track reflects the culmination of decades of research not just in atmospheric sciences, but also computer science, remote sensing, and other fields.

A human, even with all the incredible observations we have today, could never have anticipated that shift with such precision days in advance without computer models.  The problem with the way that humans think is that we have to simplify and categorize things.  We need to take shortcuts.  We rely on analogs to past events.  We tend to think linearly, whereas the atmosphere is nonlinear and doesn't always behave in straightforward ways.

In contrast, computer models are not constrained by excessive simplifications, past analogs, or linear thinking. They solve a set of equations based on the conservation of momentum, conservation of mass, conservation of energy, and ideal gas law.  In other words, the laws of physics, and those laws are a beautiful thing.

Of course, since we are doing this on a computer, some approximations are needed.  In addition, we are limited by computer time and this means we can't directly simulate every physical process.   Nevertheless, a model based on the laws of physics can do things we might not anticipate as humans.  It can predict events that have never happened before.  It does not rely on simplistic, linear thinking, like most humans do.

Our computer modeling capabilities have improved steadily and dramatically since they were first developed circa 1950.  First, we have made huge advances in how we create "initial conditions" for these models, through the development of improved observing systems (especially satellite based) and new techniques for bringing all of that data together into an analysis.  We have been able to add more detail to the simulation (called "resolution"), resulting in the improved simulation of physical processes that influence hurricane intensity and track.  We have developed ensemble modeling systems that produce many forecasts to try to account for the chaotic nature of the atmosphere so that we recognize the uncertainties in the forecast.

So, where does this leave us?  The bottom line is this.  Computer models today largely show us the way.  Yes, there are some phenomenon we struggle with mightily (snowfall in the Wasatch for example) and you can bet there will be a future hurricane that is not as well forecast as Harvey or Irma.  However, no human can integrate the laws of physics in their head.  Meteorologists aren't spending a lot of time on "why," but instead the "what", as in what are the possibilities, what are the hazards and impacts, what are the uncertainties.  Then there is the issue of communicating all of this complexity to the public and decision makers.  It's an end to end process that is imperfect, but the good news, it's getting better and I think there is every reason to be very optimistic that it will get even better in the future.
By Jim S Posted at 9/14/2017 09:08:00 AM